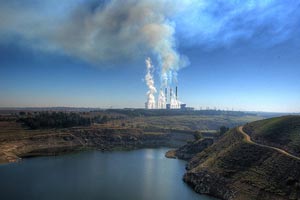 The Environmental Protection Agency’s plan to roll out regulations on planet-warming gases may hit a snag in the coming months—opposition from environmentalists. While industry groups are mounting major legal challenges to the agency’s ability to regulate greenhouse gases, the EPA’s decision to scale back the number of pollution sources subject to these new rules has raised the ire of greens who worry the agency isn’t being aggressive enough.

Bill Snape, senior counsel at the Center for Biological Diversity, says the EPA is guilty of “extreme backtracking” on greenhouse gas regulations. The group has announced its intention to sue the EPA over the coming climate regulations, which it deems too weak.

The EPA already faces a host of challenges to the coming greenhouse gas regulations, with a number of states, industry groups, and trade associations challenging even the underlying finding that greenhouse gases pose risks to human health. Groups like Peabody Energy Corp., the National Mining Association, and the US Chamber of Commerce, as well as a number of states, have challenged other aspects of the rules, too, arguing that EPA regulations will be too stringent and would cripple the economy.

The back story: In 2007, the Supreme Court determined that the EPA could regulate greenhouse gases under the Clean Air Act if the agency determined that the emissions were a threat to human health. The Bush administration refused to make a determination one way or the other. But in April 2009, the Obama administration EPA reached that determination, triggering the regulatory process.

But the Clean Air Act was written to deal with pollutants like lead, nitrogen dioxide, and sulfur dioxide, which are emitted in much lower amounts than carbon dioxide, for example. The limits for those pollutants under the law range from 100 to 250 tons per year. (The average coal-fired power plant, by comparison, emits 4 million US tons of CO2 per year.) A threshold that low for carbon dioxide and other greenhouse gases would be difficult to employ, the EPA says, and would require regulating a number of small businesses that are not the main culprit when it comes to climate change. A threshold of just 250 tons would cover many more emission sources than would be reasonable, or necessary, to regulate.

With this in mind, the EPA decided to issue a rule that would guide their process for regulating greenhouse gas emissions from non-mobile sources (i.e., not cars and trucks), in order to focus on much larger generators of greenhouse gases like those coal-fired power plants and heavy manufacturers—those that make things like cement and steel, which require quite a bit of energy. The draft version of the rule, issued in September, would have required all sources that increased emissions more than 25,000 tons of greenhouse gases per year to obtain special operating permits. But when the agency issued the final rule in May, it had raised that threshold for existing facilities to 75,000 tons per year and 100,000 tons for new or modified facilities. According to the timeline EPA Administrator Lisa Jackson has laid out, the rules would begin phasing in next January.

The EPA has made the point of this rule, called a “tailoring rule,” clear—it wants to focus primarily on the biggest sources of planet-warming gases, like coal-fired power plants, rather than small ones “that clearly were not appropriate at this point to even consider regulating,” as EPA assistant administrator for air Gina McCarthy said in May. The EPA indicated that it believed the lower limit might mean some hospitals or even large apartment buildings could end up covered by the rule, which they didn’t want—at least not initially. Under the EPA’s rule, regulations targeting emitters in the 25,000-ton range wouldn’t take effect unitl 2016.

That’s “too far away,” says the Center for Biological Diversity’s Snape. He worries that the date will only get pushed further back as industry fights the rules in court. And, of course, there’s always the possibility that another administration could come into office and never follow through with the rule at all. Snape accused the Obama administration of scaling back the EPA rules in order to curry favor with industry for new climate legislation, which isn’t likely to happen in Congress anytime soon, anyway.

While his organization supports the principle of targeting only the biggest pollution sources first, Snape says the “devil is in details, and EPA has fallen down on details.” The gap between the proposed rule and the final leaves many major sources of greenhouse gases, like some refiners and other manufacturing facilities, uncovered for years. (The Sierra Club has also filed a challenge to the tailoring rule, though the group’s attorney, Joanne Spalding, describes the suit as more of an “insurance policy” to ensure emissions rules take effect as planned.)

Snape says the Center for Biological Diversity’s suit should be viewed similarly. “We want to make sure EPA maintains its backbone,” he says.