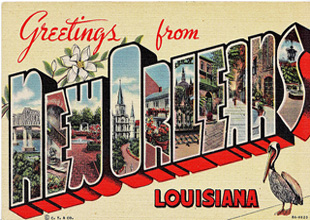 New Orleans, Louisiana—When I meet Dave Fountain, he’s sprawled across the couch of his house on Bartholomew Street, decked out in a dirty white tank top and black trousers, barefoot. I’ve stumbled into his home to ask him about what’s outside of it: Snare drums and trombones dangle from the front gate, casting shadows on a lawn display built from old Halloween decorations. On the front walk, two mannequins, equipped with a rowboat and life preservers, are navigating imaginary flood waters, beckoning for help. There’s a coffin stuck halfway through one door. A headless zombie (that’s a side of Katrina you never saw on CNN, I guess) is sitting on his front porch, next to a stuffed Siberian tiger, and directly beneath a painting of the Voodoo queen of New Orleans. I’d asked a neighbor whether it’d be a wise choice to knock, and got the all-systems-go: “Tell him Smokey sent ya.”

Katrina didn’t hit the Bywater, where Dave lives, as bad as it hit the Lower Ninth Ward across the canal, but it didn’t exactly spare it, either. When the flood waters rose to 5 feet and 5 inches (the measurement comes from the still-visible watermark on his window), Dave camped out on his roof. Spending three days and three nights on an island, baking in the sun and blacked-out at night, does real wonders for your peace of mind; the museum he’s putting together is his way of rebuilding, in every sense of the word:

“I ain’t got nothing else to do,” Dave explains. “The way I see it, people come from all over the world to see nothin’—so I give ’em something to look at.”

His museum, open for business but still very much a work in progress, consists of two rooms and is packed with voodoo dolls and concert posters, Mardi Gras masks and instruments, CDs, kitschy trinkets, and historical artifacts—including a two-piece telephone he says still works, and a set of slave shackles, complete with a key and a steel dog tag with the born-on date (1853) and the name of the plantation (Bel-Air). It’s really not a museum at all so much as a living room with an idea. It’s terribly organized, highly illogical, and kind of dirty in places—but there’s a spark to it. A bit like New Orleans, I guess.

In the years following the storm, as the neighborhood slowly came back to life, Dave trimmed the grass in nearby vacant lots, opened up his doors to “drink beer and talk shit,” and even held church services. “They had pews and everything.”

I finally make my way out the door, after he’s burned me a copy of a slideshow he made with images from the storm, and showed me some of his clippings (I’m hardly the first person to stop by).

One block down from Dave’s unfinished shrine, Harry Connick Jr. and Branford Marsalis have teamed up with Habitat for Humanity to build “Musicians Village,” a three-block-long stretch of pastel-colored shotgun houses intended to serve as magnets for the city’s displaced artists. It’s a nice idea, and emblematic of the kind of initiatives that have sprung up around some the most afflicted parts of the city. But not all that’s lost can be rebuilt with nails and 2x4s. Dave fidgets a lot when he talks, is prone to mumbling, and sometimes doesn’t make eye contact; you get the sense that those three nights up on the roof, all by himself, surrounded by nothing, might have something to do with it. 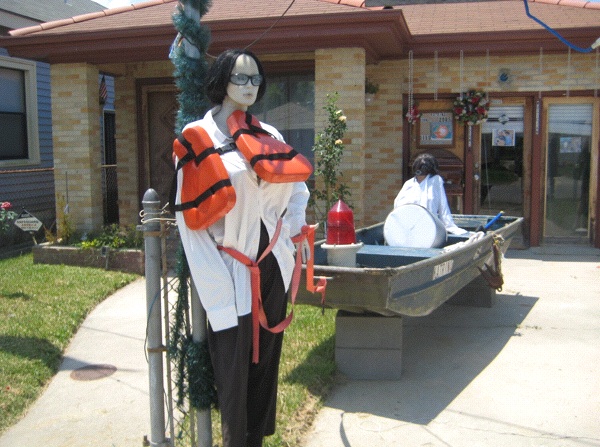 “You don’t think about music and then it’s not there no more,” Dave says.