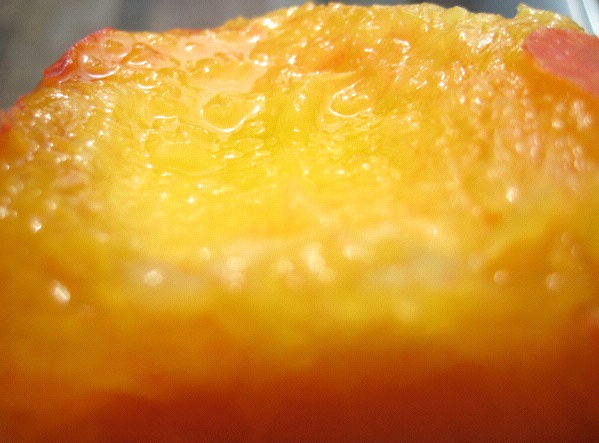 Farm Fresh: Our stated goal of living off the land has been more or less dead on arrival. But we did pick up this delicious peach outside Bedford, Kentucky (Photo: Tim Murphy).Glasgow, Kentucky—There isn’t much going on in Glasgow between the hours of 12 in the morning and 12 the next morning. You might come in for lunch from some lesser part of Barren County (“The #1 county to live in in rural America”) or you might have some official business at the county seat, but the town’s economic pulse has, for the most part, followed small town America’s late 20th-century migration from Main Street to the commercial sprawl outside town, near the junction of four major state highways. When we arrive, the Democratic Party Headquarters is closed, indefinitely by the looks of it. The “Pawn Again” shop is closed. The Highland Games, Inc. office is closed, and doesn’t really have much reason to re-open for a few months at least, since the Highland Games come but once a year. Everything is closed for the night—save for the front steps of the Courthouse on the main square, where a man called “Pastor Ricky” is overseeing a Wednesday night revival meeting.

It’s a small crowd, maybe 30 people, of all ages but with an emphasis on the older vintages. I can’t stick around to see Pastor Ricky, but since I’m fascinated by the rhetorical stylings of country evangelists, and since this is really the main event on a Wednesday night in Glasgow, Kentucky, I’ll just give you a quick sketch of his understudy, a man whom Pastor Ricky introduces as “the best preacher this side of Glasgow.”

The best way to understand our man is to imagine that he’s being remixed by an overly caffeinated hip-hop producer. “Amen” and “Praise the Lord” (say it all together, like praisetheLord), and “Praise God” and “Say a prayer” are his samples, which he injects at the end of most sentence fragments, like a hook from an old Bowie song. When he’s feeling it—and that’s often enough—he’ll string them together, jabbing with one, then another, and then back again, while his flock all the while jumps in on the chorus (sometimes literally jumping, as the situation dictates): Amen—amen. PraisetheLord amen. Amen—amen. And so on and so forth. You don’t get to become the best preacher this side of Glasgow without a little touch of cadence.

Every once in a while, our preacher will invoke Pastor Ricky—”ain’t that right, Pastor Ricky? Amen. Amen, praisetheLord, Pastor Ricky.” And then Pastor Ricky will go back to thumbing through his big book, tapping his right foot, and staring straight ahead, getting his head right.

When making any sort of complex argument, it’s always important to acknowledge the other viewpoints, if only to summarily dismiss them: “I’m not preaching Muhammad, or any—or Rev’ren Moon, or any other—amen—I’m preaching the gospel of Jesus Christ—amen—Are you believing in Him today?—amen—Everybody who knocks on the door shall be let in—amen—All that believes shall come to me—amen—ain’t you glad you come to me?—amen. Amen, praisetheLord—amen.”

“Amen. Get off me, bug! One time a man was up preachin’ and a bug went up in his mouth, he said ‘He was lost and I done took him in.’ PraisetheLord amen.”