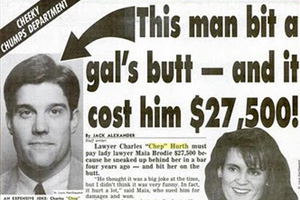 Meet Charles Hurth III. The Missouri lawyer has a long history of setting up under-the-radar groups to help Republican operatives game elections. But the most sordid thing about Hurth’s past is not his political scheming. He’s also what you might call a serial butt-biter, with a well-publicized track record of sinking his teeth into the rumps of college coeds. He recently struck again in Texas—not by biting derrieres, but by spearheading an apparent GOP dirty trick to derail a Democrat’s gubernatorial bid.

Last month, Hurth and two other GOP operatives—one a former top aide to Texas Gov. Rick Perry—were implicated in a scheme to bankroll a petition drive to put the Green Party on the ballot. It is an apparent ploy to siphon votes away from Perry’s Democratic challenger, former Houston Mayor Bill White. He’s an appealing target: Tied with Perry in the latest poll, White’s the strongest gubernatorial contender that Texas Democrats have seen in years.

But Hurth’s first claim to fame was being sued in 1987 for approaching a fellow law student in a bar and biting her on the buttocks so hard that she required medical attention. During the trial, Hurth admitted that he’d used the same toothy overture to approach two other women at fraternity parties—and he said that his latest victim should have taken the gesture as a compliment. The jurors didn’t buy it, and Hurth was successfully sued for $27,500. Since then, he has dedicated himself to being a persistent pain in the butt for Democrats, setting up shop in a tiny Missouri town to create a clearinghouse for Republican electoral schemes. The latest came this spring, when Hurth and his allies succeeded in getting the Greens on the 2010 ballot.

In response, the Texas Democratic Party filed a lawsuit in early June against a Hurth-run nonprofit called Take Initiative America, as well as Arizona-based GOP consultant Tim Mooney and “unknown conspirators” for their role in the effort. Mooney has admitted that he funneled money through Hurth’s organization to pay Free and Equal Inc., a Chicago-based petition-gathering company that ended up amassing 92,000 signatures for the Texas Green Party’s ballot drive. According to a court document, Hurth’s group spent $532,500 on the effort.

Mooney has repeatedly refused to say where the money came from—and denies that it was a GOP plot to bring down White. “Take Initiative America is a nonpartisan organization,” he told the Dallas Morning News, which first broke the news of his involvement. “They’d like to see everybody have a chance to get on the ballot—the more choices the better.”

Especially if those choices draw votes away from Democratic candidates. This isn’t the first time that Mooney and Hurth have resorted to such schemes to help Republicans at the polls. In 2004, Hurth set up an organization called Choices for America that furtively solicited help from Republicans to get then-presidential candidate Ralph Nader on the ballot in New Hampshire, Nevada, and Pennsylvania, among other states. Mooney assisted with Hurth’s 2004 effort, along with Dave Carney, George H.W. Bush’s former political director who’s now one of Rick Perry’s top consultants. At the time, Carney acknowledged to the Dallas Morning News that he was trying to gather signatures for Nader in order to help George W. Bush get reelected. According to the script for the petition drive, canvassers were instructed to tell Bush supporters, “Without Nader, Bush would not be president.”

Three years later, Hurth undertook yet another effort to manipulate electoral politics to the Republicans’ advantage. In 2007, Take Initiative America funded a California ballot initiative that would have distributed the state’s 55 electoral votes by congressional district instead of winner-takes-all. Had it succeeded, the effort would have greatly benefited Republican presidential contenders in the state. Hurth similarly refused to reveal the donor behind the effort, who finally came forward after Democrats accused the group of money-laundering and California officials vowed to investigate. Paul Singer, a hedge-fund manager and major Giuliani fundraiser, admitted that he gave $175,000 to the effort. (Hurth himself contributed $2,000 to Giuliani’s presidential bid.) Then-Democratic National Committee Chair Howard Dean decried the initiative and pointed the finger at the Giuliani campaign, which denied any involvement. The Perry campaign has similarly denied any role in this year’s Green Party ploy. But the tentacles of the scandal reach dangerously close to his camp.

It was allegedly Perry’s former chief of staff, Mike Toomey, who approached a 22-year-old college student, Garrett Mize, to talk to the Green Party about accepting the outside help, according to Mize’s court testimony. (Toomey, who’s now a lobbyist, also helped mastermind former Rep. Tom DeLay’s scheme to funnel secret corporate money to help the GOP’s redistricting effort in 2003.) The Texas Green Party eagerly accepted the offer—even though a court-released email between Green Party officials reveals that party officials were acutely aware the money could be coming from Republican sources. The email also mentions Perry’s top political consultant Anthony Holm as being interested in paying for 40 percent of the party’s petitioning costs, though he’s since denied any role in the schme.

The Texas Green Party has refused to withdraw from the ballot, saying it was “misled” about the kind of money that was used to fund GOP’s scheme. “It’s not like we intentionally did this,” said Kat Swift, statewide coordinator for the Texas Green Party, at a press conference in early July. According to her account, the Texas Greens never knew what Take Initiative America really stood for or who might be involved. But Swift has since embraced the GOP help as a form of realpolitik, arguing that Texas has some of the most stringent requirements for getting on the ballot in the country. “Wherever the money came from doesn’t bother me,” she told the Dallas Morning News. “People are trying to open the ballot to increase democracy and so, who cares how they vote?”

It’s unclear, though whether the Green Party’s presence on the ticket will actually hurt White’s chances, as the recent controversy has divided Green Party supporters. Some of its closest allies have turned against the party for knowingly accepting the GOP assistance—and refusing to back out even after discovering it was paid for by Hurth’s nonprofit corporation (which qualifies, for the purposes of campaign-finance law, as corporate money). The Texas League of Conservation Voters, which has often backed Green Party candidates, said the party’s “use of corporate, out-of-state money directed from partisan operatives for a petition drive corrupts and manipulates the electoral process.” One local Green Party candidate for Travis County Clerk has already withdrawn his candidacy, citing his opposition to the Green Party’s acceptance of corporate-funded help—even though the party itself has called for the end of corporate funding in all elections.

Texas Democrats, for their part, have given up their push to keep the Green Party off the ballot: they dropped part of their lawsuit last week after the (all-Republican) Texas Supreme Court decided to let the Green Party remain on the ballot while it reviewed the case. But the state’s Democratic party says it will continue with a legal challenge in a lower court to discover who was funding the GOP-backed petition drive, contending that the source and use of Hurth’s funds might have been illegal. If even more incriminating evidence surfaces, the Green Party scheme could really end up biting the Texas GOP in the butt.