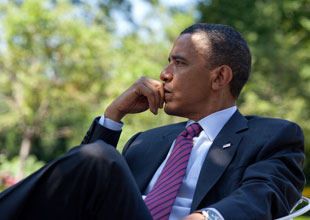 Did the Obama administration intentionally lose a major lawsuit challenging the Defense of Marriage Act (DOMA)? That’s what gay-marriage foes seem to believe. On Thursday, a federal judge in Boston found that DOMA, which prohibits the federal government from extending pension and other employment benefits to same-sex couples, is unconstitutional. US District Judge Joseph Tauro, a Nixon appointee no less, said that DOMA violates the equal protection rights of those couples and tramples the rights of the states to regulate marriage in violation of the 10th Amendment. Tauro writes:

As irrational prejudice plainly never constitutes a legitimate government interest, this court must hold that Section 3 of DOMA as applied to Plaintiffs violates the equal protection principles embodied in the Fifth Amendment to the United States Constitution.

The case was one of those weird holdover lawsuits filed during the Bush administration, which would have fought for DOMA to the death, but then was limply defended by the Obama administration. Obama’s Department of Justice was clearly holding its nose and defending DOMA out of established practice rather than belief in its merits. In its briefs, the DOJ even said that while it believed that DOMA was constitutional, “this Administration does not support DOMA as a matter of policy, believes that it is discriminatory, and supports its repeal.” The agency also said it “does not believe that DOMA is rationally related to any legitimate government interests in procreation and child-rearing,” gay-marriage foes’ primary argument supporting the law.

Those less than passionate arguments didn’t escape the folks at the National Organization for Marriage, which accused the Obama administration and Solicitor General Elena Kagan, whose office reviewed the DOJ’s DOMA defense briefs, of deliberately sabotaging the Massachusetts lawsuit. In an angry statement yesterday, NOM president Brian Brown said:

With only Obama to defend DOMA, this federal judge has taken the extraordinary step of overturning a law passed by huge bipartisan majorities and signed into law by Pres. Clinton in 1996. A single federal judge in Boston has no moral right to decide the definition of marriage for the people of the United States.

Does this federal judge want to start another culture war? Does he really want another Roe. v. Wade? The simple fact is that the right of the federal government to define marriage for the purposes of its federal law and federal territories has been clear since the late 19th century, when Congress banned polygamy. Only an incompetent defense could have lost this case. We expect to win in a higher court.

Thursday’s ruling was just the latest in a string of legal setbacks NOM has suffered recently in its attempts to outlaw gay marriage. Despite NOM’s big win helping ban same-sex unions in California in 2008, the group has been struggling in the courts elsewhere, including its attempt to defend California’s Prop 8 in a lengthy federal court trial this year. Clearly, Brown and Gallagher have some wounds to lick. But they weren’t the only ones speaking of sabotage after Thursday’s ruling. Ed Whelan over at the National Review concurred with their analysis, and sees the Tauro decision as more evidence that Kagan should be rejected as a Supreme Court justice because of her views on gay rights and refusal to defend DOMA aggressively. He writes, “Her dereliction of duty offers powerful evidence that she would indulge her ideological preferences as a justice and provides ample reason for any senator to oppose her confirmation.”

If Obama really wants to sabotage the Massachusetts case, he could ask DOJ not to appeal Tauro’s decision. He could simply choose to let the 15,000 Massachusetts residents who are in same-sex marriages have access to the same federal benefits as any other married couples, and then headline the annual Human Rights Campaign dinner without getting booed. Of course, no one seems to think that’s what will happen. Lawyers for the plaintiffs told the New York Times yesterday they fully expected the DOJ to fight the decision. It will be years before the case reaches the Supreme Court, but when it does, it’s likely that Kagan will be one of the people who decide its final outcome, a fact that Whelan and other gay-marriage foes are obviously dreading.

A side note: Judge Tauro’s ruling also creates some interesting political dynamics for a group that isn’t a party to the lawsuit: the tea party movement. Tauro based part of his decision on the tea partiers’ favorite constitutional amendment: the 10th, which enshrines states’ rights into the founding document. Tea Partiers and other die-hard “conservative constitutionalists” frequently insist that the 10th Amendment should be applied rigorously. Tauro’s decision will put many of those folks in a bit of a bind, pitting their allegiance to the Constitution against their religious beliefs and distain for gays and lesbians. As Yale law prof Jack Balkin told the New York Times Thursday, Tauro was “attempting to hoist conservatives by their own petard, by saying: ‘You like the 10th Amendment? I’ll give you the 10th Amendment! I’ll strike down DOMA!'”