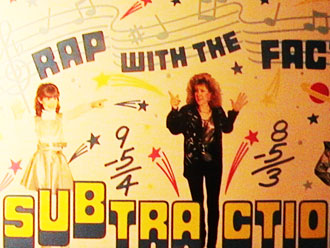 The only thing I learned from Paul Edwards’ new book, How to Rap: The Art and Science of the Hip-Hop MC, was that I can’t rap.

This will come as no surprise to those who know me—and really, it probably isn’t all that surprising to those who don’t. Because if you concede that hip-hop is an art form, then—unless you belong to Malcolm Gladwell’s How to Fall Asleep at Night Despite Your Shortcomings club—you probably also concede that rapping is a skill granted to a lucky few, gifted people. Just as most of us can’t paint landscapes that would ever see the inside of a museum, most of us simply can’t rap very well.

In 1931, logician Kurt Gödel demonstrated his now-famous Incompleteness Theorem, proof that in whichever branch of mathematics you study—geometry, arithmetic, set theory, etc.—there will always be truths that you cannot prove. His logic (pun intended) is surprisingly simple. And there’s a great explanation here that I’ll try to summarize:

Say you have a program on your laptop, let’s call it KRS-One, that supposedly can tell you whether any statement is true or false. It knows the truth of some of our most controversial claims. (It takes three licks to get to the center of a Tootsie Pop; Buzz wasn’t flying—he was falling with style.) It’s an impressive piece of software, to be sure, but now feed it this statement: KRS-One will never say that this sentence is true.

You can see the problem. KRS-One can’t tell you that the statement is true—although we know that it is. Replace the rules that govern KRS-One’s responses with the set of axioms used to prove statements in math, and essentially you have Gödel’s proof. As mathematician Rudy Rucker put it in his book Infinity and the Mind, Gödel showed that “rational thought can never penetrate to the final ultimate truth.”

What the hell, you ask, does this have to do with hip-hop?

How to Rap claims to be a how-to guide for rappers: Give the book to a dedicated kid who’s looking to flow, and it’ll make an MC of him. Edwards breaks down the process of creating a hip-hop song into four parts (content, flow, writing, and delivery), drawing on interviews from more than 100 artists—from Cypress Hill to Jurassic 5—to populate these sections of the book. If you’re going to write a how-to guide, this certainly seems like a good way to go about it.

Problem. Consider the content section, where will.i.am of the Black Eyed Peas says, “Sometimes I rap about the stuff from clubs. Sometime I rap about the world—whatever inspires me” and compare that with MC Serch’s advice: “Write about yourself.” Or in the writing section: Chuck D says he writes on paper “but also the computer has helped me out a great deal.” But Hell Rell says, “I feel [writing in your head] is better.”

I’m cherry-picking here; there are better quotes. The point is, follow any piece of advice in this book and you’ll likely find the opposite a few pages later. What makes these rappers great is not their personal creative axioms. It’s as though you had two electricians, and one is telling you how to build a tube television while the other is focusing on a plasma model. They might both be great, but you can’t build a working television by combining their advice.

What fascinates me about Gödel’s Incompleteness Theorem is that it shows not so much what we do know as what we can’t know. Carl Boyer writes in A History of Mathematics: “Perhaps doomed [as a result of Gödel’s proof] is the ideal of science—to devise a set of axioms from which all phenomena of the external world can be deduced.”

The same seems to hold for the art of rap. How to Rap is fascinating precisely because it shows that you could never learn how to rap from a book. It’s not the content that’s off—these rappers provide a fascinating history of their personal careers and hip-hop in general. It’s the framing as a do-it-yourself manual that’s the problem. It’s akin to reading Alan Lomax’s Mister Jelly Roll: The Fortunes of Jelly Roll Morton, New Orleans Creole and “Inventor of Jazz” as a how-to guide and then going out and buying a month’s worth of suits, a pool stick, and a piano, and trying to teach yourself jazz.

Consider the last line of Kool G Rap’s foreword: “You gotta know what it is to be a great MC in order to do it—you got to hear it, you got to feel it.” Hear it. Feel it. Not read it. Exactly. Perhaps a more fitting title would have been The Hip-Hop Incompleteness Theorem.