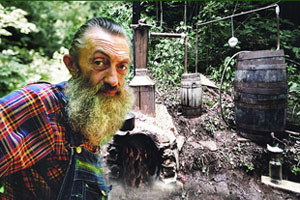 Bybee, Tennessee—The road to Cocke County from the Great Smoky Mountains takes us through Gatlinburg and Pigeon Forge, the Crabbe and Goyle of modern American tourist sprawl. You’ll pass by, in no particular order, a “Ripley’s Believe it or Not!” museum (ubiquitous wherever geographical oddities and commercial zoning coincide); a “Hollywood Wax Museum”; no fewer than 15 places to buy moccasins; frontier-themed amusement parks; fake waterfalls; “Hillbilly Golf”; some place called “Magiquest,” which I think has something to do with magic; a dinosaur museum; a store selling nothing but “As Seen on TV” products; and Dollywood, the world’s only Dolly Parton theme park. It’s the real-life equivalent of an avalanche of pop-up windows, made all the more jarring by the fact that it immediately follows the serenity of the Smokies.

But the roadside SPAM ends by the time you get to Cocke County, an hour up the road. Cocke used to be the moonshine capital of the United States, but now, with bootlegging no longer worth the risk (for the most part), younger generations have turned to more modern occupations: White lightning was replaced by marijuana, which was replaced by cocaine, and now that, according to Ray Snader, who covers the area for a local radio station, has been replaced by chop shops and salvage switch operations—a process in which car thefts swap vehicle information numbers of a stolen car with that of a wrecked car. Those lines of work, coupled with perpetually high unemployment figures, lend themselves to a distrust of government and anyone who comes between you and your community, which is part of the reason why Eastern Tennessee is one of the more conservatives regions in the United States. As Ray puts it: “You talk to some of the old people, and they say, ‘You can say it was illegal and we don’t like to break the law, but when it comes down to breaking the law and feeding the family, or not feeding the family, we feed the family.'”

Moonshine may be entering its twilight—the Tennessee legislature recently passed a law legalizing moonshine distilleries, which means that pretty soon it’ll be just another piece of roadside kitsch you can buy with your moccasins in Gatlinburg. Ray tells me the story of “Popcorn” Sutton, a notorious moonshiner who committed suicide in March of 2009 before he was set to begin serving an 18-month prison term. Popcorn, says Ray, “was the end of an era.” Here’s his story:

“He was a short, skinny fella, who always wore his hat—that was kind of his claim to fame, his hat that he always wore. And his bib overalls—he always wore bib overalls. Even when he came to federal court, he was wearing bib overalls. He was a friendly fellow, and of course every time you would talk to him, he would say, ‘Ray, I’ve run my last run of moonshine, I’m not gonna do it anymore, I’m just getting too old to be doing this stuff.’ And so that’s what he’d say every time! But he’d tell me that, and he’d let everybody know, but his cellphone number was very available—he’d give it to people to call to order some moonshine. And one of the stories that came out in his federal court case was that he had met up with a fellow and sold him 50 gallons of moonshine, because there was a discounted rate…he had ended up selling 50 gallons to this undercover agent, helped him load it and everything.

“I guess, probably about two years or so ago, he married a woman, and he was married at the time that he committed suicide. He was actually buried in a very isolated plot in western North Carolina, near the graves of his mother and father, but the vandals came in and stole all of the grave markings of the grave site. And so several months later, his wife had his body exhumed and there was a large public memorial service to him. And after that memorial service, his body was taken on a horse-drawn caisson to his property in Parrotsville, Tennessee, where it was reburied. Before his death, he already had his coffin—the shovels were there. And he also had his grave marker, a small grave marker that was already made, to put on his grave. And I didn’t see it personally, but I’ve seen photos of it. And it said simply, “Popcorn says ‘Fuck You.'”

Before we leave, Ray shows me a photo he took of Popcorn during his trial. When they’d last spoke, Popcorn had pleaded with Ray not to snap any photos of him and his stills, lest they be used against him by the feds. But of course, after the ATF saw the place, that wasn’t going to be much of a problem. So Popcorn relented, and Ray gave him a three-count to smile for the camera.

In the photo, Popcorn is wearing his bib overalls and his trademark hat. His beard, characteristically, looks like it might comfortably house a small migrating population of water fowl, and his eyes are set back in their sockets from decades of close-calls with what Ray calls “the revenuers.” His face is largely blank, although he’s squinting a little; considering his circumstances, you can imagine what may have been going through his mind. But with his right hand, Popcorn said all he needed. Addressed to the law, the camera, the fates, and his last (for real this time) run of moonshine: a one-fingered sneak preview of his final resting place.

His corpse was stolen, hidden and reburied in THE LAST PLACE he’d want to be laid to rest. I find it more than disturbing that this article refers to a rash of vandalism THAT NEVER HAPPENED. Only one stone was ever disturbed in the private cemetery where my father was buried. That stone was removed because the individual who placed it there- beside my father’s head stone- never received permission to add their stone to a private cemetery.

This was the subject of considerable controversy at the time, and Sky would of course have been closer to the situation than I was. But for what it’s worth, Ray stands by his narrative. Either way, the larger point of the story stands.