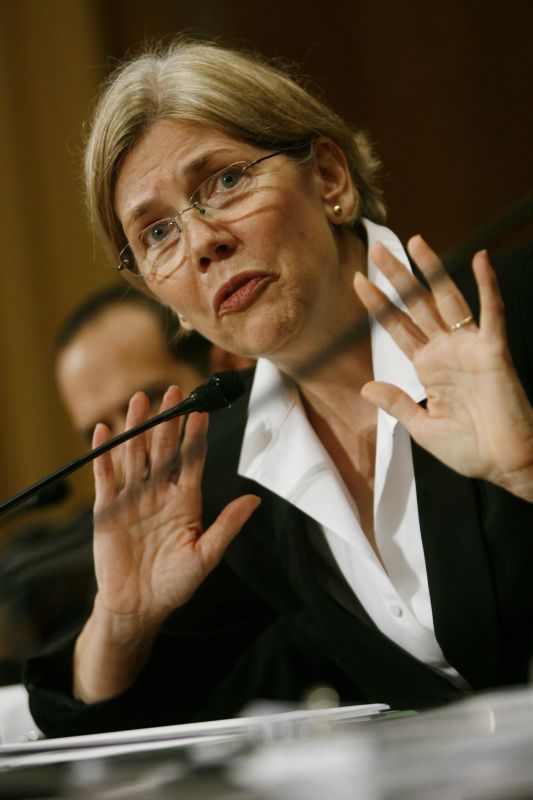 Noam Scheiber of The New Republic chips in Tuesday with the latest on Elizabeth Warren, the bailout watchdog and irrepressible thorn in Treasury Secretary Tim Geithner’s side, and her potential nomination to run the new Consumer Financial Protection Bureau. Remember, this bureau was her idea, first proposed in 2007. And while she should be a shoo-in for the role, Warren’s potential nomination has grown into a minor controversy and a cause celebre among progressive groups. Scheiber’s story quotes a whole bunch of anonymous sources, does some back-of-the-envelope math, sizes up the GOPers who could back Warren, and arrives at the not-so-revelatory conclusion that “it wouldn’t be surprising to see Warren nominated—and then quickly approved in an anticlimatic vote.”

What grinds me about Scheiber’s article, other than the reliance on anonymous sources, is this paragraph, about midway through the piece:

But, for the moment, what’s interesting is the banks’ silence. Three industry officials I spoke with took care to assure me that their organizations aren’t actively opposing Warren. One defied me to find someone in the industry who was. Another reflected that, from the banks’ perspective, Warren might actually be preferable to Michael Barr, an assistant Treasury Secretary who is also a leading candidate for the position. [emphasis mine]

Noam must not read Mother Jones. Too bad. Last week, I reported that the industry is indeed lobbying against Warren’s nomination. During a fly-in last week hosted by the American Bankers Association, one of the largest banking industry trade groups in the US, a number of presidents and CEOs of state bankers associations told me—on the record—that they used the visit as a chance to meet with their delegations and lobby against Warren’s nomination. The presidents of the Iowa and Oklahoma Bankers Associations both told me they lobbied their delegations against Warren. A third banking association chief, George Beattie, the president and CEO of the Nebraska Bankers Association, told me he’s had “a number of conversations” with Sen. Ben Nelson (R-Neb.) to express his opposition to Warren running the consumer protection bureau.

You might think the views of these three banking chiefs are outliers, but Beattie added this when I asked him about the national-level ABA’s views on Warren: “With my colleagues at the ABA, these views about her would be shared.” (The ABA did not return my requests for comment about Warren and Beattie’s remarks when I reported last week’s story.)

So, back to Noam. I wouldn’t be so keen to take at face value what “three industry officials” say, as he’s done in today’s story. A quick Google search would’ve proved all three of them wrong.