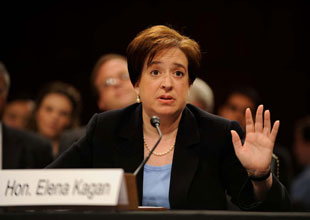 Solicitor General Elena Kagan begins her third day of the confirmation hearing process that will determine if she becomes the next Supreme Court Justice. | © Christy Bowe/Globe Photos/ZUMApress.com.

Supreme Court nominee Elena Kagan may become the first modern justice whose vetting was designed to placate people in tricornered hats. Her three-day, nationally televised comfirmation hearings gave Republican members of the Senate Judiciary Committee lots of air time to pander to their constituents back home. And it was clear from the get-go that their talking points weren’t intended to elicit Kagan’s legal philosophy (they knew she was a liberal, after all) but rather to convince the unruly tea party movement that incumbent GOP senators are the standard-bearers of constitutional conservatism.

Tea partiers revere the Constitution, which is at the heart of the Supreme Court’s work. They study it like evangelicals study the Bible. While much of their understanding of the document seems derived from Glenn Beck and 5,000 Year Leap author Cleon Skousen, many tea partiers are remarkably well versed in a wide range of constitutional law debates on everything from 2nd Amendment gun rights to whether the 10th Amendment check on federal power renders health care reform unconstitutional. And while public interest in the Kagan hearings seemed pretty low, if anyone was paying attention, it was tea party activists.

The Republicans didn’t disappoint. On Tuesday, Texas Sen. John Cornyn lamented that the tea partiers’ favorite 10th Amendment “has largely, in my opinion, been rendered a dead letter by Supreme Court decisions.” He bashed the recent “individual mandate” contained in the health care reform bill that has so energized the grassroots activists, saying, “If Congress can force people to—who are sitting on their couch at home—to purchase a product and penalize them if they don’t purchase the government-approved product, it seems to me there is no limit to the federal government’s authority and we’ve come a long, long way from what our founders intended.”

Republicans also devoted many of their Kagan questions to the Commerce Clause, which gives Congress a constitutional right to regulate interstate commerce. Small-government conservatives have long hated the Commerce Clause because Congress has invoked it to do everything from banning guns around schools to creating federal civil rights legislation. Tea partiers are strangely fluent in Commerce Clause rhetoric, so it’s likely they knew exactly what Sen. Tom Coburn (R-Okla.) was talking about when he asked Kagan Tuesday night whether Congress could pass a law forcing Americans to eat vegetables three times a day. Both Cornyn and Sen. Jon Kyl (R-Ariz.) hammered away at the same idea. Cornyn even demanded that Kagan name one activity that Congress couldn’t regulate with the Commerce Clause. (Of course, she didn’t.)

Coburn, an ob/gyn long known as a darling of the evangelical Christian wing of his party, deftly adopted the language of the tea party during the Kagan hearings. Once, he was practically shouting at her as he read from the Federalist Papers, another set of documents beloved by tea partiers. He even extracted a pledge from Kagan that she would go back and re-read them (perhaps right after she gets done writing a letter of recommendation for her friend Miguel Estrada, the right-wing lawyer Democrats filibustered out of a job as a DC circuit court judge in 2003). Coburn invoked the unhappy people of his state who have expressed to him their displeasure with the way the country is headed, and waxed nostalgic for the golden years of the Reagan era. He could have been giving a tea party speech on the need to “take our country back.” Alabama Sen. Jeff Sessions, the committee’s ranking Republican made a string of similar remarks.

Covering all the tea party bases during the hearing, Republicans were careful to throw in a few jabs at illegal immigrants and foreigners in general, particularly Israeli chief justices and any others who might find executing juveniles barbaric. In fact, Kyl showed such disgust at the notion that Kagan might look to international law—or that Harvard Law School might inflict it on its students—that you’d have thought she was leading the Reconquista. “I don’t understand why international law should have any relevance in US courts,” he fumed before quoting noted legal expert George Will on the subject. Apparently Democrats thought this was such a damning statement that Judiciary Committee staff quickly blasted out an email explaining why Kagan would never, ever ever peek at foreign law (especially not from socialist countries like, say, Sweden).

And while “natural law” is also a favorite of the religious right, both Coburn and Sen. Charles Grassley (R-Iowa) ensured that no one flying a Gadsden flag would have any doubt that the Republicans believe the right to bear arms stems directly from God. Asserting a divine right to self-defense no doubt went over well with the tea party movement’s significant concealed-carry contingent. Kagan didn’t have a lot to say on the subject of natural law (though she did support gun rights). But she was really superfluous to the proceedings. After all, in this particular Supreme Court hearing, where the outcome is already pre-determined, the only votes that really count are the ones back home.