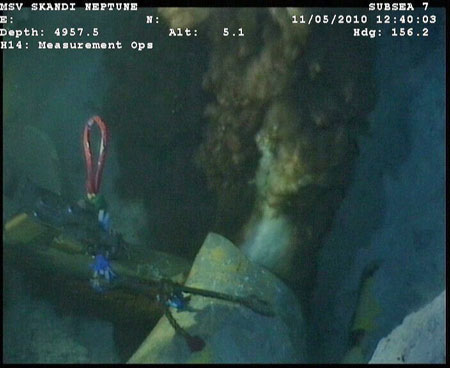 Sharon Astyk at ScienceBlogs points the way to a seriously scary comment thread at The Oil Drum, a sounding board for, among others, many petroleum geologists and oil professionals. The comment in question is from a seemingly very knowledgable “dougr.” Some of it follows verbatim below. I’ve highlighted the parts that frightened me the most and left me wondering: Is this why Obama’s praying?

You can read the comment in its entirety here, complete with useful links, as well as all the comments (some of which dissent from dougr’s claims) made in response.  Sharon notes, to the inevitable question of why pass along an anonymous comment: “This one passes my smell test, which is usually pretty good – that doesn’t mean I claim commenter Doug R is right – it means I think his information is interesting enough to be worth exposing to a wider audience for clarification or correction.” As the Oil Drum staff explains to its own readers regarding this post: “Were the US government and BP more forthcoming with information and details, the situation would not be giving rise to so much speculation about what is actually going on in the Gulf. This should be run more like Mission Control at NASA than an exclusive country club function–it is a public matter–transparency, now!” Amen. Meanwhile, judge for yourself:

“All the actions and few tid bits of information all lead to one inescapable conclusion. The well pipes below the sea floor are broken and leaking. Now you have some real data of how BP’s actions are evidence of that, as well as some murky statement from “BP officials” confirming the same.

“To those of us outside the real inside loop, yet still fairly knowledgeable, [the failure of Top Kill] was a major confirmation of what many feared. That the system below the sea floor has serious failures of varying magnitude in the complicated chain, and it is breaking down and it will continue to.

“What does this mean?

“It means they will never cap the gusher after the wellhead. They cannot…the more they try and restrict the oil gushing out the bop?…the more it will transfer to the leaks below. Just like a leaky garden hose with a nozzle on it. When you open up the nozzle?…it doesn’t leak so bad, you close the nozzle?…it leaks real bad, same dynamics. It is why they sawed the riser off…or tried to anyway…but they clipped it off, to relieve pressure on the leaks “down hole”. I’m sure there was a bit of panic time after they crimp/pinched off the large riser pipe and the Diamond wire saw got stuck and failed…because that crimp diverted pressure and flow to the rupture down below.

“Contrary to what most of us would think as logical to stop the oil mess, actually opening up the gushing well and making it gush more became direction BP took after confirming that there was a leak. In fact if you note their actions, that should become clear. They have shifted from stopping or restricting the gusher to opening it up and catching it. This only makes sense if they want to relieve pressure at the leak hidden down below the seabed…..and that sort of leak is one of the most dangerous and potentially damaging kind of leak there could be. It is also inaccessible which compounds our problems. There is no way to stop that leak from above, all they can do is relieve the pressure on it and the only way to do that right now is to open up the nozzle above and gush more oil into the gulf and hopefully catch it, which they have done, they just neglected to tell us why, gee thanks.

“A down hole leak is dangerous and damaging for several reasons. There will be erosion throughout the entire beat up, beat on and beat down remainder of the “system” including that inaccessible leak. The same erosion I spoke about in the first post is still present and has never stopped, cannot be stopped, is impossible to stop and will always be present in and acting on anything that is left which has crude oil “Product” rushing through it. There are abrasives still present, swirling flow will create hot spots of wear and this erosion is relentless and will always be present until eventually it wears away enough material to break it’s way out. It will slowly eat the bop away especially at the now pinched off riser head and it will flow more and more. Perhaps BP can outrun or keep up with that out flow with various suckage methods for a period of time, but eventually the well will win that race, just how long that race will be?…no one really knows….However now?…there are other problems that a down hole leak will and must produce that will compound this already bad situation.

“This down hole leak will undermine the foundation of the seabed in and around the well area. It also weakens the only thing holding up the massive Blow Out Preventer’s immense bulk of 450 tons. In fact?…we are beginning to the results of the well’s total integrity beginning to fail due to the undermining being caused by the leaking well bore.

“The first layer of the sea floor in the gulf is mostly lose material of sand and silt. It doesn’t hold up anything and isn’t meant to, what holds the entire subsea system of the Bop in place is the well itself… The well’s piping in comparison is actually very much smaller than the Blow Out Preventer and strong as it may be, it relies on some support from the seabed to function and not literally fall over…and it is now showing signs of doing just that….falling over…

“What is likely to happen now?

“Well…none of what is likely to happen is good, in fact…it’s about as bad as it gets. I am convinced the erosion and compromising of the entire system is accelerating and attacking more key structural areas of the well, the blow out preventer and surrounding strata holding it all up and together. This is evidenced by the tilt of the blow out preventer and the erosion which has exposed the well head connection. What eventually will happen is that the blow out preventer will literally tip over if they do not run supports to it as the currents push on it. I suspect they will run those supports as cables tied to anchors very soon, if they don’t, they are inviting disaster that much sooner.

“Eventually even that will be futile as the well casings cannot support the weight of the massive system above with out the cement bond to the earth and that bond is being eroded away. When enough is eroded away the casings will buckle and the BOP will collapse the well. If and when you begin to see oil and gas coming up around the well area from under the BOP? or the area around the well head connection and casing sinking more and more rapidly? …it won’t be too long after that the entire system fails. BP must be aware of this, they are mapping the sea floor sonically and that is not a mere exercise. Our Gov’t must be well aware too, they just are not telling us.

“All of these things lead to only one place, a fully wide open well bore directly to the oil deposit…after that, it goes into the realm of “the worst things you can think of” The well may come completely apart as the inner liners fail. There is still a very long drill string in the well, that could literally come flying out…as I said…all the worst things you can think of are a possibility, but the very least damaging outcome as bad as it is, is that we are stuck with a wide open gusher blowing out 150,000 barrels a day of raw oil or more. There isn’t any “cap dome” or any other suck fixer device on earth that exists or could be built that will stop it from gushing out and doing more and more damage to the gulf. While at the same time also doing more damage to the well, making the chance of halting it with a kill from the bottom up less and less likely to work, which as it stands now?….is the only real chance we have left to stop it all.

“It’s a race now…a race to drill the relief wells and take our last chance at killing this monster before the whole weakened, wore out, blown out, leaking and failing system gives up it’s last gasp in a horrific crescendo.

“We are not even 2 months into it, barely half way by even optimistic estimates. The damage done by the leaked oil now is virtually immeasurable already and it will not get better, it can only get worse. No matter how much they can collect, there will still be thousands and thousands of gallons leaking out every minute, every hour of every day. We have 2 months left before the relief wells are even near in position and set up to take a kill shot and that is being optimistic as I said.

“Over the next 2 months the mechanical situation also cannot improve, it can only get worse, getting better is an impossibility. While they may make some gains on collecting the leaked oil, the structural situation cannot heal itself. It will continue to erode and flow out more oil and eventually the inevitable collapse which cannot be stopped will happen. It is only a simple matter of who can “get there first”…us or the well.”