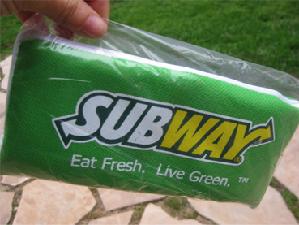 Sure, they got socialized medicine and cheap prescriptions, but there ain’t no free lunches in Nova Scotia—at least not when you work for America’s largest fast-food chain. Heide Heise, a full-time “sandwich artist” for a Subway in the Canadian city of Dartmouth, was fired this week when supervisors reviewed the store’s closed-circuit TV and discovered that she gave two six-inch subs last week to a pair of patrons without collecting any money from them.

Of course she did: They were residents of her apartment building, which last Thursday was ravaged by a massive fire. The two men lost their home, and Heise was putting them up at her place. When they came in to thank her, she fed them, too.

“They showed up. I knew they had no food, no money and no where to live so I gave them each a six-inch sub I was supposed to write down as my employee meal,” Heise told a Canadian news service. (Subway employees are entitled to one discounted foot-long sub as a shift meal.) “Because of all the stuff that was going on it totally slipped my mind to even write it down…Yeah, I just forgot to write it down and they fired me for it…

“I’ve worked double shifts when they asked me too, I’ve done everything they wanted me to, and I guess this is the thanks I get,” she told CTV, which has video of the brouhaha.

Corporate representatives of Subway were mum on the case. “It’s an unfortunate situation,” Linda Garrett-Coll of Canada-based Atlantic Subway Ltd. told CTV. But that’s all she’d really say: “Technically, it’s a personnel issue and we have no comment.”

This is, of course, the same fast-food chain whose idea of committing to eco-friendly values was swapping in a single low-energy lightbulb in every store. And who also rolled out its eco-friendly reusable bags for cookies, individually wrapped in useless plastic bags. (See photo above.)

The landlord of Heise’s apartment, AJ Clark—who’s clearly got a lot to worry about these days—is predictably hella-pissed: Besides the injustice of it, now one of his tenants has lost her source of rent money, too. Canwest reports:

“Since the fire, everyone’s been in a scramble. She was more than generous to give up her apartment and then she goes to work and gets fired,” Clark said.

So far, only tenants in 26 of the 74 units were allowed to return to their homes, Clark said.

He called Heise’s employers to tell them he knew of local veterinarians who nursed pets injured in the fire and refused to charge.

In trying times like these, I always ask myself: What would Jared do?