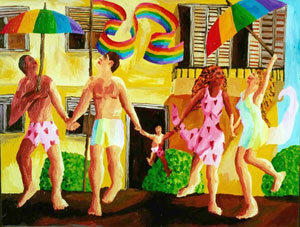 I read the entire 164-page transcript of this week’s closing arguments for the Prop. 8 trial, which will determine whether gays can marry in California. Here’s everything you need to know:

On Wednesday, Charles Cooper (the attorney defending the state’s ban on gay marriages) continued to fling fallacious appeals to tradition, including his signature “marriage is solely for procreation” schtick. Judge Vaughn Walker didn’t buy it. Ted Olson, “the godfather of the conservative legal movement” (see also: the attorney fighting against Prop. 8), skillfully refuted it.

Olson hit the discriminative nail right on its bigoted head when he said “people passed Proposition 8 because they don’t—they think gays are unusual.” Cooper disputed this claim by saying voters believe that “society would come to an end” if gays married since “the central purpose of marriage in virtually all societies and at all times has been to channel potentially procreative sexual relationships into enduring stable unions to increase the likelihood that any offspring will be raised by the man and woman who brought them into the world.”

Yes, Cooper really did say that in one breath. And he said it with all the logical holes you see here, since state laws generally don’t bar straight couples from marrying if they don’t want children or can’t conceive, which Judge Walker noted. Walker also pointed out that the state generally doesn’t care whether a child is conceived in wedlock, by accident, or through a one-night stand, whether via in vitro fertilization, surrogacy, or some other way. The state only cares that a child is taken care of once born, which adoption by gay married couples would help to do. How did Cooper fare after that, you ask? Spoiler alert: Not well.

When asked to supply concrete evidence that regulating marriage would promote “responsible procreation,” Cooper said, “you don’t have to have evidence of this point.” Cooper then contended that same-sex marriage jeopardizes the survival of mankind by jeopardizing the way nature intended things to be. (Too bad homosexuality occurs in nature, which ends that paltry excuse.)

Olson then pointed out that the end-of-the-human-race argument assumes that every man and woman is gay, and that on hearing the words “same-sex marriage is legal,” suddenly the majority of society will realize they’ve been in the closet all along! Gay people account for about 10 percent or less of the population, and obviously some do conceive by using some of the alternative methods mentioned above. But in truth, the downfall of humanity is unlikely to be due to a lack of conception. And if the success of traditional heterosexual marriage is a reason to maintain its man-woman status, here’s a heads up that its sanctity was infiltrated (PDF) a while ago. The US—whether the majority is aware of it or not—has already redefined marriage.

Some debate on how sexual orientation is determined—is it genetic or learned?—went on. After that thought exercise, the question became: How can any government justify the unconstitutional practice of segregation? Olson said it best: “Marriage, the Supreme Court has said again and again, is a component of liberty, privacy, association, spirituality and autonomy. It is the right of individuals, not an indulgence dispensed by the State of California, or any state, to favored classes of citizens which could easily be withdrawn if the state were to change its mind about procreation. It is not a right belonging to the State of California.” Score!

Even if the US District Court supports Prop. 8, which is unlikely, the US Supreme Court may rule that state laws barring gay marriages are unconstitutional. Just as it did in similar cases back in 1967 and 1978, when lawyers likewise argued that interracial marriages would destroy society.

Walker is expected to deliver his ruling in July or later. Stay tuned!