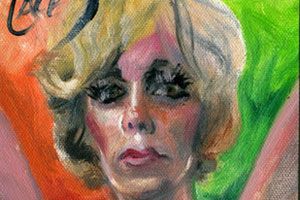 Just because she’s spent the past few months campaigning to become California’s next secretary of state doesn’t mean that “birther” queen Dr. Orly Taitz has given up her many court battles seeking to prove that President Barack Obama is not an American citizen. On May 19, Taitz filed a “motion to reconsider” in her mostly failed lawsuit against Obama in DC federal court. And one basis for the motion was none other than a Mother Jones article! Yes, Taitz told the court that she has discovered new evidence of “intimidation and harassment” against her in my story on Dan Lacey, the Minnesota “Painter of Pancakes,” who has painted some nude portraits of Taitz giving birth to a pancake.

Taitz told me in May that her opponents have sent copies of the painting to her children and family along with threatening emails in what she believes was an attempt to scare her into dropping her insurgent campaign to be the GOP’s candidate for California’s secretary of state. She suspects that one of Obama’s powerful allies commissioned the painting. I asked Lacey about that and he was cagey on the subject. So Taitz wants to subpoena him to force him to out his benefactor. She writes:

“Recent article by Washington burro [sic] correspondent Stephanie Mencimer shows that “artist” Dan Lacey, who painted despicable art work series “Birther Orly Taitz”, showing Taitz nude, with her legs spread, giving birth and holding bloody placenta, which were sent to her children, posted on the Internet and a local paper, did not work on his own accord. Dan Lacey admitted, that he was commissioned, paid by someone to do this, it was a clear attempt to intimidate Taitz and pressure her to withdraw as a candidate…Lacey refused to provide the reporter Stephanie Mencimer with the name of the person who hired him, who paid him, however during the depositions and upon subpoena this information will be available and will be provided to [the] court. At this time Taitz cannot state with certainty who paid Dan Lacey, however it is common knowledge, that Billionaire George Soros, one of the biggest backers of Obama, through his organization Moveon.org, has commissioned numerous artists to promote Obama and denigrate his opponents and critics.”

Lacey, for his part, has responded with a YouTube video in which he promises to reveal the identity of the “puppetmaster” behind the Pancake Birther series, pixel by pixel, as part of his new legal defense fundraising. He promises to enter the name of anyone who donates $2.37 to the defense fund into a drawing to win the new painting, which will be awarded at a “Colors of Orly” art show fundraiser in Minneapolis on July 4th. Watch the video here: