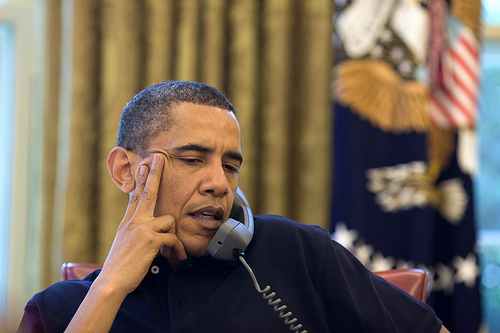 Kevin Drum asked earlier whether President Obama would “go big” in tonight’s Oval Office address on the Gulf oil spill disaster. I hoped he would. But he didn’t come close.

There was plenty of militaristic talk, with Obama outlining the “battle plan” for the spill and noting that “there will be more oil and more damage before this siege is done.” But his speech was short on specifics concerning both the near-term response to the immediate crisis and the long-term energy policy that will curb the nation’s dependence on oil.

On the Gulf disaster, Obama could have offered clear direction on several issues: for instance, by clarifying the administration’s stance on eliminating the liability cap to protect oil companies from damages following a spill, or by offering a hard number for how much money BP must set aside for the independently administered fund the government has proposed.

Then there are the questions about wider energy and climate policy that remain unanswered. Obama largely avoided the issue of climate change, only uttering the word “climate” once as part of the phrase “a strong and comprehensive energy and climate bill.” He at least hit the right notes on clean energy, talking about solar power, wind, efficiency, and electric cars, an improvement over his State of the Union address this year, where nuclear power, “clean” coal, and offshore drilling figured heavily. But what his speech lacked was specific directives, which is what the Senate needs at this point. There wasn’t even a clear call for a carbon cap, which I fear all but dooms its chances this year.

Take this key passage from the address:

I’m happy to look at other ideas and approaches from either party -– as long they seriously tackle our addiction to fossil fuels. Some have suggested raising efficiency standards in our buildings like we did in our cars and trucks. Some believe we should set standards to ensure that more of our electricity comes from wind and solar power. Others wonder why the energy industry only spends a fraction of what the high-tech industry does on research and development -– and want to rapidly boost our investments in such research and development. All of these approaches have merit, and deserve a fair hearing in the months ahead. But the one approach I will not accept is inaction.

Guidance from the White House is what moved health care reform and financial re-regulation, but Obama still hasn’t asserted himself on climate and energy in the same way. Tonight was that opportunity. He didn’t take it.