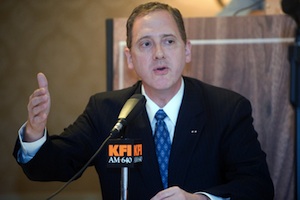 When Sarah Palin endorsed former Hewlett-Packard CEO Carly Fiorina in the California Republican Senate primary last month, the conservative grassroots saw it as nothing short of a betrayal. Why had Palin—supposedly a Tea Party champion—thrown her star power behind a “RINO” who’d served as John McCain’s economics advisor during the 2008 campaign? These activists already had a favorite candidate in mind: Chuck DeVore, an Orange County state assemblyman and army reservist who’d spent much of the last year and a half channeling the disaffection of the conservative base.

Palin, by her own admission, was picking winners, not favorites. In a Facebook post, she explained, “Carly is the only conservative in the race who can beat [Sen. Barbara] Boxer.” That Palin would show herself to be something of an opportunist hardly merits a Drudge siren. But what stands out is the notion that backing a former corporate executive making her first run for elected office could be considered the opportunistic thing to do. In the past month, victories by insurgent candidates in Utah and Kentucky over contenders backed by the GOP establishment have put the Tea Party on a winning streak. So far, however, California has proved to be the demon sheep in the flock: It’s the only major race in 2010 in which the grassroots favorite is an also-ran.

Although DeVore downplays the Tea Party tag—”I think that any candidate that would self-identify that way is gravely misunderstanding what the Tea Party movement is all about,” he told me last month—the shoe certainly fits. Sen. Jim DeMint (R-SC), who became a Tea Party kingmaker thanks to his early support of Marco Rubio in the Florida Senate primary, threw an online “moneybomb” fundraiser for DeVore in February. In March, DeVore received the endorsement of the Tea Party Express at a grassroots mega-rally in Searchlight, Nevada, headlined by Palin. DeVore also has the backing of what you might call the conservative netroots: Andrew Breitbart supports him; so does RedState’s Erick Erickson. For all these reasons, George Will predicted a DeVore victory on ABC’s This Week, pronouncing, “He is the conservative in the race.”

But the Tea Party bump never came. While polls have put DeVore within reach of Boxer in a hypothetical November matchup, they also don’t give him much hope of getting to that point. After traversing the state in a 2004 Cadillac CTS for 17 months, with 350 campaign stops and around 50 Tea Parties, DeVore is polling in the teens in the GOP primary and has consistently remained behind Fiorina and and former Rep. Tom Campbell, a Silicon Valley moderate. According to a March Los Angeles Times/USC poll, a plurality of primary voters would prefer a “centrist” candidate to a “very conservative one” to take on Boxer. As Jack Pitney, a political scientist at Claremont McKenna, puts it, “California Republicans are pretty conservative. But they don’t like to lose.”

What’s to blame for DeVore’s poor showing? One answer is money. DeVore raised just $1.2 million in 14 months on the trail last year, most of which he spent before he even had an opponent. In the first quarter of 2010, he only rustled up $626,000—considerably less than Campbell ($1.6 million), and Fiorina, ($1.7 million).

Without money, DeVore lacks visibility. He originally planned not to air any TV ads during the primary, (although he made an exception to purchase two statewide spots during the season finale of 24.) “If the California broadcast media paid close attention to politics, he would be rising in the polls,” says Pitney. “But most TV stations give scant attention to politics. If he wants to get serious time in the Los Angeles media market, he’ll have to get himself in a car chase.”

Larry Gerston, a professor of political science at San Jose State, sees DeVore’s lack of a TV presence as indicative of a larger failure. “It’s almost as if he’s saying, ‘if you really want to know who I am and you really believe in who I am, you’ll vote for me. My job is not to go out there and get your vote.’ You’ve got to respect somebody on one level for that, but on the other hand you have to wonder if it’s almost naive.”

DeVore argues that his hard work online, where his campaign has drawn notice for its hyperactive Twitter feed (he has more than 11,000 followers) and “Beat Boxer” iPhone app, will pay dividends at the voting booth. “I knew that my only path to victory would be a hardworking, methodical effort to build a grassroots army, stitched together with Al Gore’s invention,” says DeVore.

But DeVore has another problem: By cop-opting the language of the Tea Partiers, both Fiorina and Campbell have managed to pick up the support of conservative activists despite their establishment backgrounds and moderate records. Fiorina has directly sought the so-called Tea Party vote by reaching out to figures like Palin and showing up wherever there’s a Tea Party rally and a television camera. Campbell, too, has courted ultra-conservative activists, although perhaps not as energetically. At an April candidate forum in Marin County, he and DeVore made a show of pulling out their pocket constitutions when the conversation turned to health care reform. Campbell’s, DeVore conceded, looked even more dog-eared than his own. The audience ate it up.

These overtures have worked for Fiorina and, to a lesser extent, Campbell: According to a June 5th poll by the Field Research Corporation, among self-identified Tea Partiers, Fiorina took in 42 percent. DeVore had the support of just 25 percent, edging out Campbell (17 percent).

Other key conservative players have also lined up behind Fiorina. The same week that Fiorina bagged the Palin endorsement, she earned the backing of two major anti-abortion organizations: the California Pro-Life Council and the Susan B. Anthony Fund. In explaining why his group took a pass on DeVore, a lifelong social conservative, CPLC president Brian Johnston told the San Francisco Chronicle, “It’s difficult to go into battle if you don’t have the resources. We had to look at this in a realpolitik way.” DeVore points out that, according to the Federal Elections Commission filings, Fiorina’s campaign still owed money at the end of the first quarter. “I would have expected them to have either stayed neutral or endorsed me,” he says.

Yet despite his campaign’s flagging fortunes, DeVore remains optimistic about his chances on Tuesday. “This is not 2004 or 98 or 92; this is 2010,” he says. “People are extremely concerned about the fiscal health of the nation. They’re extremely concerned about this unprecedented expansion of government, using money largely borrowed from China to do it. And of the three of us, I’m the one with the consistent record on those issues.”