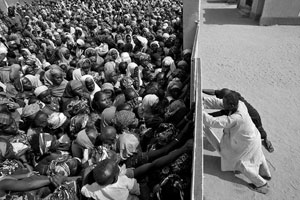 International aid agencies have issued emergency appeals about the rising famine in the West African nations of Niger and Chad, which could eventually threaten millions. The Guardian reports today:

Starving people in drought-stricken west Africa are being forced to eat leaves and collect grain from ant hills, say aid agencies, warning that 10 million people face starvation across the region.

With food prices soaring and malnourished livestock dying, villagers were turning to any sources of food to stay alive, said Charles Bambara, Oxfam officer for the west African region. “People are eating wild fruit and leaves, and building ant hills just to capture the tiny amount of grain that the ants collect inside…

In Niger, which the United Nations classifies as the world’s least developed country, starving families are eating flour mixed with wild leaves and boiled plants. More than 7 million people—almost half the population—currently face food insecurity in the country, making it the hardest hit by the crisis. According to UN agencies, 200,000 children need treatment for malnutrition in Niger alone. “Niger is at crisis point now and we need to act quickly before this crisis becomes a full-blown humanitarian disaster,” said Caroline Gluck, an Oxfam representative in the country.

The real tragedy—and travesty—lies in the fact that there is food available in Niger, but starving people cannot afford to buy it.

With food prices spiralling, people are being forced to slaughter malnourished livestock, traditionally the only form of income. “When you walk through the markets, you can see that there is food here. The problem is that the ability to buy it has disappeared. People here depend on livestock to support themselves, but animals are being killed on the edge of exhaustion, and that means they are being sold for far less money. And on top of that, the cost of food basics has risen,” explained Gluck. Compounding the crisis, thousands of animals have starved to death as villagers use animal fodder to feed themselves…

“This is just the beginning of the traditional hunger period, and people have already been forced to sell their livestock. This is very early for the alarm bells to be ringing, before Niger has even reached the start of the most critical part of the food calendar. You can imagine three to four months down the line how shocking the situation will be,” said Gluck…”West Africa has traditionally not been very high on the developed world’s priority list. The question now is how many people do we have to see die before the world will act?” she said.

In “Freemarkets and Famine in Niger,” the Guardian‘s Jeevan Vasagar writes that during the most recent famine in Niger, in 2005, “free market dogma stopped the government giving out free food to the starving.” He warns that this disaster could easily be repeated. Other analysts blamed the 2005 famine in large part on the economic policies of the IMF and EU, which contributed to a precipitous rise in the prices of staple grains.

This year, global economic factors, combined with a recent coup in Niger, are once again compounding a crisis caused by drought, and the toll in lives will be high. Just how high depends upon what the international community and Niger’s government do next. One aid official told the Guardian that if relief does not come quickly, the crisis could reach the proportions of the 1984 famine in Ethiopia, “during which an estimated 1 million people died due to drought and a slow response to the crisis both within the country and internationally.”

The photographs already making their way out of Niger are heartbreaking and horrifying. Like the news reports, they tend to focus on children, who make up half of Niger’s population. Nearly 380,000 children are at risk of starvation in the next few months, according to Save the Children.

In the 2005 Niger famine, the UN identified the elderly and the sick, along with children, as the “most vulnerable groups,” who would be “on the brink of being wiped out” without substantial aid. The Guardian reported that older people were often the last to be fed even when help arrived: “As aid agencies focus their scant resources on saving malnourished babies and children, the elderly are the forgotten victims of the crisis in Niger.” Older women, in particular, usually fell at the end of the line.

Oxfam is taking donations for its emergency response in West Africa here. Save the Children’s emergency appeal for Niger is here. To support emergency aid programs specifically targeting the needs of old people, donations can be made to HelpAge International.

This post first appeared on the Unsilent Generation blog.