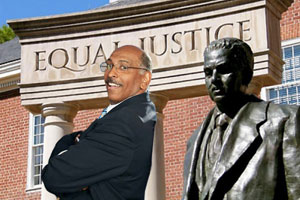 During confirmation hearings for Supreme Court nominee Elena Kagan, it almost seemed as if the late and legendary Justice Thurgood Marshall was the one being vetted—rather than Kagan, who once clerked for him. Republicans on the Senate judiciary committee have tried to turn the civil rights icon into ammo for their assault on Kagan, attacking Marshall as a “judicial activist” and suggesting that the same could be expected of Kagan. This wasn’t a surprise. Michael Steele, the chairman of the Republican National Committee, kick-started this bash-Marshall campaign last month by pouncing on Kagan for praising a 1987 Marshall speech in which the ex-justice said the Constitution, “as originally drafted and conceived,” was “defective.” Marshall had been referring to the Constitution’s definition of slaves as three-fifths of “free persons.” But Steele’s oppo gang at the RNC seized on this and zapped out a memo hammering Kagan: “Does Kagan Still View Constitution ‘As Originally Drafted And Conceived’ As ‘Defective’?”

Choosing to go after the country’s first black Supreme Court justice is an iffy strategy for the GOPers. But it’s an especially strange line of attack for Steele—formerly Maryland’s first black lieutenant governor—who used to laud Marshall as a hero.

For instance, in July 2004, Steele honored Marshall as a barrier-shattering champion on the 40th anniversary of the 1964 Civil Rights Act. Standing in front of a memorial statue of Marshall near the Governor’s Mansion in Annapolis , Steele declared: “Without the ’64 act, I do not stand in the shadow of this giant.” Also in attendance was Arthur Fletcher, one of the original plaintiffs in Brown v. Board of Education. As the NAACP’s chief counsel, Marshall had represented Fletcher in that landmark case, which ended legalized segregation in schools. During the ceremony, Fletcher told then-Maryland Gov. Robert Ehrlich, “Thank you for making that young man [Steele] lieutenant governor.”

In public speeches, Steele has admonished others to follow Marshall’s example. After losing the 2006 Senate race in Maryland to Democrat Benjamin Cardin, Steele quoted Marshall in his concession speech: “And I told [Cardin]…don’t forget the poor. Don’t forget those who are trying their best. But like Thurgood Marshall said, ‘be the hand or two to help them.’ So, I hope he is that kind of senator.” In 2005, Steele helped christen the state’s largest airport “Baltimore-Washington International Thurgood Marshall Airport.” A year later, Steele unveiled an exhibit at the airport honoring the judicial work of its namesake. “It is particularly significant for our younger Marylanders, who may not be familiar with [Marshall’s] legacy,” Steele said at the 2006 ceremony. “He honored us by his example, and we are proud to honor him in this small way.”

Steele himself was honored in 2003 for carrying on the Marshall tradition, when he received the Community Leadership Award from the Thurgood Marshall College Fund—where Elena Kagan was once a board member. (It was formerly known as the Thurgood Marshall Scholarship Fund.) The mission of the Fund is clear: to honor Marshall’s “legacy and commitment to education” by awarding scholarships to students at historically black colleges. With this award, the group recognized Steele as one of the “foremost visionaries who have…impart[ed] a positive impact on the lives of our next generation of leaders.”

Does Steele support the GOP’s ongoing offensive against Marshall? The RNC did not respond to a request for comment.

This Republican charge against Marshall is a throwback—with Southern white GOPers, notably Sen. Jeff Sessions of Alabama, the senior Republican on the judiciary committee, coming across as if they want to relitigate the civil rights era. None of these senators have pointed to any decision that Marshall rendered as a justice to bolster their attack. Instead, they have derided Marshall for being a supposed judicial activist—noting that he once quipped, “do what you think is right and let the law catch up”—and then slammed Kagan for admiring him.

This may play well in the deep South, but this strategy could have a cost. Blasting Kagan as a Marshall fan is highly unlikely to derail her nomination. Congressional switchboards have not lit up with calls from Americans demanding that the Supreme Court be off-limits to a clerk of one of its most well-known justices. But this positioning has cast Republicans as hostile toward a civil rights hero. (Marshall may be the most famous civil rights crusader to hold a top government job.) For decades, Marshall has not been a controversial figure; he has been revered.

When Steele became chair of the GOP in early 2009, he vowed that his party would reach out to minorities. Trashing Marshall during a nationally televised hearing—as his son sits in the committee room watching—is not going to help Republicans win over many African-Americans. And by joining in—actually, triggering—the Marshall attack, Steele has demonstrated that he’s willing to throw even his own hero under the bus for the sake of politics. Perhaps Steele ought to return that award to the Thurgood Marshall College Fund. Or maybe the fund ought to ask for it back.

*Correction: the original post had stated the Marshall statue was in Baltimore; it is in Annapolis.