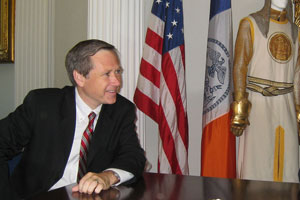 On Tuesday, the Democratic National Committee blasted reporters with a Huffington Post piece on Illinois Senate candidate Mark Kirk’s history of “exaggeration[s].” Kirk, a moderate Republican congressman who is running for Barack Obama’s old Senate seat, has been under fire for embellishing parts of his (already impressive) military service record. But the HuffPo piece wasn’t about that. It was about an episode in 2008 when Kirk claimed that China was drilling for oil off the coast of Cuba. Mother Jones’ Jonathan Stein explained why this was wrong at the time:

Problem is, that’s all false. Like, completely false. China is not currently drilling off the shores of Cuba; in fact, it doesn’t even have a off shore drilling contract. What is does have is a permit to drill on Cuban land. “China is not drilling in Cuba’s Gulf of Mexico waters, period,” Jorge Piñon, an energy expert at the University of Miami’s Center for Hemispheric Policy, told the Miami Herald. In fact, it is not yet drilling on Cuban land, either…. The Congressional Research Service also debunks Republican claims: “While there has been some concern about China’s potential involvement in offshore deepwater oil projects, to date its involvement in Cuba’s oil sector has been focused on onshore oil extraction in Pinar del Rio province through its state-run China Petroleum and Chemical Corporation. (Sinopec)”

So the whole thing was totally false. But Kirk wasn’t the only person to make the claim. In fact, a whole gaggle of Republicans were talking about the phantom Chinese drilling in 2008 as part of a remarkably transparent effort to push for more offshore drilling. If the communists were doing it, well, we should too, right? Anyway, it was bull-hockey, but that didn’t stop them. Here’s former Vice President Cheney:

“[O]il is being drilled right now 60 miles off the coast of Florida. We’re not doing it. The Chinese are in cooperation with the Cuban government… Even the communists have figured out that a good answer to high prices is more supply. Yet Congress has said… no to drilling off Florida.”

“Even China recognizes that oil and natural gas is readily available off our shores; thanks to Fidel Castro, they’ve been given a permit to drill for oil 45 miles from the Florida Keys.”

“Right at this moment, some 60 miles or less off the coast of Key West, Florida, China has the green light to drill for oil in order to lower energy costs in that country.”

The point here is that politicians don’t always tell the whole the truth. In fact, they often don’t tell the whole truth. But for whatever reason there’s only a media firestorm when politicians mislead about themselves. If you claim that the health care bill has death panels, you can still be taken seriously. But woe unto the politician who says something wrong about him or herself. Anyway, I bet that Kirk’s misleading statements about Chinese drilling won’t become an issue in the campaign. If we started expecting politicians to tell the truth, then we’d have to make a fuss every time Rand Paul distorted the Americans With Disabilities Act. Fact-checking legislative issues is boring. But catching someone lying about their past? Fun!