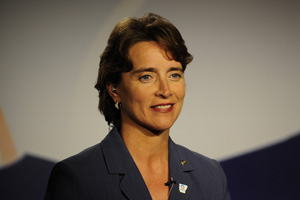 If you thought the May 18 primaries were big, just wait until you get a load of June 8th’s. We’re talking six senate primaries, six gubernatorial races, and a whopping 96 House primaries—and that doesn’t even count the key runoff election in Arkansas. By Tuesday night, we’ll know a lot more about what—and who—to expect in November. Will more longtime incumbents go down in flames? Will Tea Partiers continue to push out GOP moderates? Will the unions claim their first major scalp of the election cycle? Here’s your guide to June’s biggest election night.

These are the races that are most likely to dominate Wednesday morning’s headlines. If you have limited time for politics on Tuesday, pay attention to these races:

The Lowdown: Incumbent Sen. Blanche Lincoln barely squeaked by challenger Lt. Gov. Bill Halter in the May 18 primary, forcing the two into a runoff. The race has been one of the most expensive and bitterly contested showdowns in state history. Labor unions and liberal groups have continued their all-hands-on-deck campaign against Lincoln, angry with her failure to support a measure that would make it easier for unions to organize, as well as her vote against the health care reconciliation bill. In the wake of the BP oil spill, environmental groups have also piled on, slamming Lincoln for taking more money from oil and gas companies than any other senator. In response, the Chamber of Commerce and Democratic heavyweights such as Bill Clinton have leaped to Lincoln’s defense in the final days.

The Polls: Halter holds a narrow lead of 49 percent to 45 percent over Lincoln. Though it’s close, Halter’s the one with the momentum, having overtaken Lincoln since she grabbed 44.5 percent of the vote to Halter’s 42.5 percent last month.

The Stakes: If Lincoln falls, she’ll be the third Senate incumbent to lose a primary this year, following Sens. Arlen Specter (D-Pa.) and Bob Bennett (R-Utah). The race is a huge test for labor and the national progressive groups that have poured millions into the contest. If Halter triumphs, it will send a warning sign to other moderate and conservative candidates that come into their crosshairs.

Our Pick: It’s close, but we predict Halter by a hair, as the polls and enthusiasm have been trending in his direction in the final weeks of a long, bloody battle. 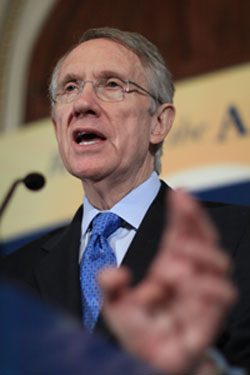 2. The Tea Party Candidate Democrats Are Cheering For

The Polls: Most recent polling shows Angle leading Lowden by 11 points and the other GOP candidate, Danny Tarkanian, by nine points.

The Stakes: The winner faces Reid, who has no primary opponent but is largely unpopular in his home state. While conservatives love Angle, the GOP establishment worries whether she can win over moderate Nevada voters. Reid’s campaign, meanwhile, loves their odds against Angle (hence the primary ads slamming Lowden) in the fall election.

Our Pick: Angle continues her late-round surge in the primary, topping Lowden and Tarkanian by single digits. 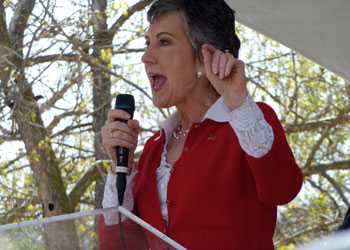 3. Tidal Waves Can’t Save the World from Carlyfornication

The Polls: It was closer before, but Fiorina’s now leading the race by double digits.

The Stakes: Fiorina is the national GOP’s pick, mostly because she can self-fund, and running political advertising in California is incredibly expensive. If Fiorina wins, she’ll face incumbent Dem Sen. Barbara Boxer in the fall in what’s sure to be a nasty fight. If she loses, it will be a massive upset. Campbell has a moderate reputation and doesn’t have the CEO baggage, so he might actually have a better chance in the general. DeVore still thinks he has a shot, too. But both of them had trouble competing with Fiorina’s immense war chest. Anyway, read Mother Jones‘ Tim Murphy for more on why DeVore, a Tea Party candidate in a Tea Party year, is having trouble.

Our Pick: Fiorina looks to have this in the bag.

Other Senate and Gubernatorial Races To Watch

These races aren’t as close as the big ones above, but could turn out to be just as important:

IA-Sen. (Dem): Former Iowa attorney general Roxanne Conlin is the front-runner in a three-way Democratic race for GOP Sen. Chuck Grassley’s long-held seat. Conlin holds a massive lead over her rivals, drawing 48 percent of the vote. (Former state rep. Bob Krause trails far behind at 13 percent, and Tom Fiegen is at 8 percent.) Conlin could present a serious—and unexpected—challenge to Grassley, a five-term incumbent. Once well regarded for his ability to reach across the aisle, Grassley has shifted farther and farther to the right since dropping out of the bipartisan health care reform negotiations last year and pushing the accusation that the bill would create “death panels.” Back in January, Grassley led Colin by almost 30 percent; Conlin has now closed to gap to 8 points in recent polling. Her certain victory tomorrow should make Grassley nervous.

SC-Gov.: Republican frontrunner Nikki Haley has spent the final weeks of her primary campaign fighting off messy allegations of affairs with a conservative blogger and South Carolina GOP political consultant. In a state still smarting from the Appalachian Trail antics of Gov. Mark Sanford, you’d think Haley’s affair allegations would’ve derailed her campaign. Instead, she enters tomorrow’s gubernatorial primary with a 17-point lead over her closest competitor, Gresham Barrett, a conservative US congressman promising to bring Arizona-style immigration reform to South Carolina. Haley’s likely opponent is state senator Vincent Sheheen, who leads by 6 points in the Democratic primary, also slated for tomorrow.

Maine-Gov.: With sitting Democratic governor John Baldacci on his way out, both Maine gubernatorial primaries are as wide open as any in recent memory. Indeed, the polling numbers for the two parties’ primaries read more like basketball box scores than measurements of public sentiment. On the blue side, the frontrunner by the slimmest of margins is state Sen. Libby Mitchell with 13 percentage points, followed by former state attorney general Steve Rowe (12 points), businesswoman Rosa Scarcelli (7 points), and Maine conservation department commissioner Patrick McGowan (6 points).

Perhaps the most telling statistic is this: The undecided comprise 62 percent of Democratic primary voters and 47 percent of GOPers. When Maine voters show up tomorrow, there’s no telling who’ll take the nominations.

There are 99 primaries for the House of Representatives on Tuesday. Here are a few to keep an eye on:

AR-01 (Dem): Rep. Marion Berry is retiring, and his chief of staff, Chad Causey, is in a runoff against Tim Wooldridge, a former state senator. Wooldridge won the original matchup 39-27. They’re both very conservative and either could stand a good chance of holding the seat against GOP nominee Rick Crawford.

AR-02 (Dem): Joyce Elliott, the Dem leader in the state senate, won a 40 percent plurality in the first round. That wasn’t enough to avoid a runoff against State House speaker Robbie Wills, and the race has turned nasty in the weeks since then. Wills is popular Gov. Mike Beebe’s choice, but Elliott is definitely more liberal. The winner will face a tough race against ex-US Attorney Tim Griffin (yes, that Tim Griffin) in the fall.

CA-19 (GOP) A slew of Republican hopefuls are battling to take over retiring GOP Rep. George Radanovich’s seat. Former Rep. Richard Pombo, who was ousted in 2006 partly due to corruption allegations and links to Jack Abramoff, is trying to make a comeback in the race. Pombo is a long-time nemesis of environmentalists and has raised buckets of cash. But the latest poll had him trailing behind two of his Republican rivals, state Sen. Jeff Denham and former Fresno mayor Jim Patterson—both of whom are considered fairly moderate Republicans accustomed to reaching across the aisle. Whoever wins on Tuesday will almost certainly win the general election in this GOP-dominated district.

VA-02; VA-05 (GOP): In these two Virginia Republican House primaries, establishment-backed Republican challengers are likely to triumph over their Tea Party rivals. In Virginia’s 5th district, Republican state Sen. Robert Hurt leads a crowded seven-candidate primary, where Tea Party squabbling has splintered the opposition. The right-wing grassroots has taken shots at Hurt for voting for multiple tax increases, attacking him as a “situational conservative.” But Hurt—with greater name recognition, deeper pockets, and GOP party support—has sailed past the Tea Party, who failed to unite behind a single candidate, and is likely to challenge incumbent Democrat Tom Perriello.

Likewise, in Virginia’s 2nd district, car dealer Scott Rigell is leading a six-candidate field, despite attacks from the right for his donation to Obama’s 2008 presidential campaign and participation in the Democrats’ “Cash for Clunkers” program. Rigell will likely challenge Glenn Nye, a conservative Democrat who voted against Obama’s health care law.

Come November, however, the Tea Party’s failures against Democrats may actually benefit conservatives: If Hurt and Rigell win their primaries, their moderate credentials and establishment backing will help them present a more formidable challenge to their Democratic opponents than the Tea Party fringe would have posed.

VA-11 (GOP): Dem Rep. Gerry Connolly is vulnerable in this suburban district in northern Virginia, but the GOP primary has been brutal. Fairfax County Supervisor Pat Herrity and businessman Keith Fimian (the ’08 nominee) have been trading slams—Herrity is accused of raising taxes while Fimian is charged with not paying his. If the two candidates hit each other too hard now, that could help Connolly in November.