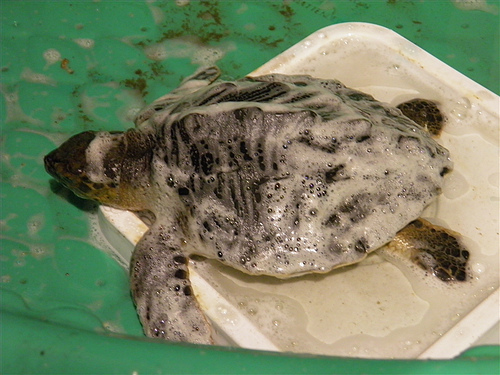 Like many, I was shocked and dismayed earlier this week when a video surfaced alleging that sea turtles were being burned alive during BP recovery efforts. In the video, captain Mike Ellis (who’s working with BP) talks about how shrimp boats are using booms to consolidate pools of crude and oil-slimed matter and then setting it on fire for an in-situ burn. According to Ellis, the pools of crude were not being checked for wildlife before being lit, meaning sea turtles caught in the slicks were likely being burned alive.

It’s been difficult to find any hard evidence that turtles were indeed burned alive. There haven’t been reports of charred shells or eye-witness accounts of seeing actual turtles on fire. That said, the Los Angeles Times yesterday corroborated part of Ellis’s account:

“But the burn operations have proved particularly excruciating for the turtle researchers, who have been trolling the same lines of oil and seaweed as the boom boats, hoping to pull turtles out of the sargassum before they are burned alive… Yet in one case, the crew had to fall back and watch as skimmers gathered up a long line of sargassum that hadn’t yet been searched–and which they believe was full of turtles that might have been saved.”

Petty Officer Crystal Kneen from the Deepwater Horizon Joint Information Center in Houma, Louisiana, said that she didn’t know of any turtles harmed by the burn. That may be true but Dr. Chris Pincetich, a biologist with the Sea Turtle Restoration Project,* says he knows and has spoken to Captain Ellis personally and the deaths of these turtles is extremely likely. In addition, this NOAA guide called Oil and Sea Turtles: Biology, Planning, and Response (PDF) states that although in-situ burns are not preferable, they could be better than the alternative of letting the oil remain: “Obviously, in-situ burning would be an unlikely choice where sea turtles aggregate–although in such an area, the impacts of prolonged or heavy exposure to untreated surface oil would be evaluated against the risks.” The guide also states that although burning removes far more oil than could be contained manually, it also sometimes leaves behind residue that congeals and is eaten by wildlife.

Ellis said most of the turtles he’d seen were juvenile Kemp’s Ridleys, a critically-endangered species, and both Pincetich and Audubon representative Sarah Burnette have said that account is definitely accurate: There’s been a recent increase in Kemp’s Ridleys, especially juveniles, seen in Louisiana rescue facilities. According to Burnette, most of the 70 turtles received by Audubon were visibly oiled and quite small, “about the size of salad plates.” Scientists have debated why so many Kemp’s Ridleys have turned up, and juveniles in particular. Pincetich points out that firstly, there are simply a lot of juvenile Kemp’s. Conservation efforts in the late 1980s boosted the number of Kemp’s from around 1,000 to around 8,000 before the spill, so the Kemp’s baby boom is still in full swing. Secondly, Kemp’s are shallow swimmers, staying within around 160 feet of the surface, and the oil. And finally, the turtles must migrate through the Gulf to get to Mexican breeding grounds and younger turtles may not have the street smarts of those who managed to survive previous oil spills.

Audubon’s Burnette said the baby turtles being rehabed by her organization are “doing great, and we can take more.” Likely, Audubon will take in more turtles… once the temporary suspension of rescue efforts has been lifted. UC Davis’s Dr. Mike Ziccardi announced that turtle rescues in the Gulf have been suspended for a few days so that crews can rest up, boats can be re-supplied, and rescue teams can “more fully develop a comprehensive plan which will have greater results as this spill continues to unfold.” Dr. Pincetich is waiting impatiently for the suspension to be lifted. “There are a dozen turtle rehab organizations waiting to get in sea mode,” he says. “They’ve got donations, a laundry list of helpers, so why are we waiting? We can help.”