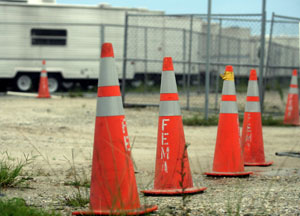 Is there a covert government plan to forcibly evacuate up to 50 million people from the Gulf Coast and move them into FEMA trailers somewhere in Missouri and elsewhere because of the oil spill? Some of the nation’s survivalists are convinced that the Obama administration is plotting just such an operation. Last week, Greg Evensen, a former Kansas state trooper and a regular on the “Patriot” movement talk circuit, appeared on the Internet radio show “Shattering the Darkness” to warn listeners that government is moving to evacuate basically everyone from the coast of Texas to Cape Cod. Evensen says the move will come after these areas become uninhabitable due to an “oversaturation of benzene” from the chemical dispersants BP is using to try to clean up the oil leaking into the Gulf of Mexico.

Yes, even an eco-tragedy can breed conspiracy theories.

Interviewed by a man known only as “the Hawk,” Evensen predicted on May 27 that the evacuations would begin sometime around June 15, after the government brings together “people who can be engaged in combat”—possibly including foreign troops—and stations them at 500-mile intervals.  He predicted that people as far north as Cape Cod might have to be evacuated, given that the oil is likely to end up “on beaches of England.”  These events, Evensen warned, would show the “rolling thunder effect of how it will bring America to its knees,” to which the Hawk responded, “This could be larger than anything we could ever imagine.”

In an interview with Mother Jones, Evensen explained that he had heard about this massive governmental operation from a “buffet meal of state and local law enforcement” sources, many of whom find him—rather than the other way around—thanks to his media appearances and Internet postings. (Evensen lives in Michigan.)

The podcast of this show soon made its way into the Tea Party world and was circulating on various listservs this week, with headlines like “Forced evacuations of 40 million begin in less than two weeks. Anyone within a thousand miles of the Gulf of Mexico needs to listen to every word of this.” John Kaminiski, a “truther” who believes Jews blew up the World Trade Center, warned in an email that “If you don’t leave now, you will never make it. You will either die on the road, or in a FEMA camp. The troops are already in place.”

One wonders how many Tea Partiers listened all the way through to the end of the Hawk’s show. Those who did might have questioned Evensen’s claims after he started discussing “previously unseen ground units,” possibly made up of “alien hybrids” masquerading as US troops, that were “emerging from areas in the Southwest and heading in an easterly direction.” From the oil spill to FEMA camps to an alien invasion—it’s the X Files gone green.

The giant spill has already inspired plenty of dubious speculation on the right. Early on, Rush Limbaugh suggested that “environmental whackos” had blown up the Deepwater Horizon oil rig to prevent more offshore drilling, a theme echoed by other conservative talkers.

Evensen has all but made a franchise out of predicting when and where government troops will round up the American people and pack them off to FEMA detention centers. Described by the New York Times as a militia leader, he makes the rounds of “Patriot” radio shows with such folks as Oath Keeper member “Sheriff” Richard Mack, and he features commentary by Larry Pratt on his website. Pratt, whom Evensen calls an acquaintance, is also a longtime militia hero and founder of Gun Owners of America.

Last year, Evensen repeatedly suggested that the government was planning to set up roadblocks to force people to get the H1N1 vaccine or tag them with a steel bracelet with a microchip that would indicate that they’d been vaccinated. Anyone who refused, according to Evensen, would be hauled off to a camp.

When none of that happened, Evensen had to make a retraction. But that didn’t seem to dampen the demand for his survivalist seminars or radio appearances. And Evensen says that he doesn’t claim to be 100 percent accurate. “We’re watchmen, if you will,” he says, explaining that he just puts information out there for people to assess for themselves. He doesn’t mention that doomsday predictions are good for business: He sells DVDs on “Castle Defense” and other “defensive planning” materials on his website (along with CDs of “Hymns from the Heartland,” performed by Evenson himself)—all of which can be purchased with gold in lieu of currency. He says he also offers seminars and survivalist trainings across the country.

For the record, Larry Chambers, a Coast Guard petty officer at the DeepWater Horizon Incident unified area command in Robert, Louisiana, says that he’s never heard of any plans for the government to evacuate the entire Southeastern coast. “That’s not going to happen,” he says.  (But isn’t this what you’d expect him to say?)

Chambers explains that the government is making contingency plans to evacuate people in the event of a hurricane—which it has real concerns about because of how heavy winds might affect the clean-up effort, and because of the large numbers of extra personnel in the region working on disaster management. “I can understand why people may even start to think about conspiracies,” Chambers says. “It’s huge. We’ve never dealt with anything like this. People are upset.”

As for FEMA, a spokesperson seemed rather perplexed by my questions about whether the agency plans to detain millions of Americans in trailers in Missouri after a mass evacuation. In an email, an agency press secretary named Rachel Racusen wrote, “FEMA continues to support the lead federal agencies for the response to the BP oil spill, the Department of Homeland Security, the Coast Guard and the Department of the Interior. To date that support has included help with staffing needs, as well as coordination and recovery expertise.” Evensen might take that as a “yes.”