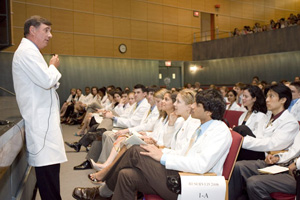 The pharmaceutical industry has wormed its way into the hearts and minds of the medical professions in any number of ways—wining and dining doctors, sending them off to vacation in splendid spas, and even buying their names to put on industry-written articles promoting different drugs.

One little known facet of this drugster-doctor relationship is Big Pharma’s role in continuing medical education (CME) programs, which are important in keeping medical professionals informed and up to date on the fast developing profession. Of the $2 billion or so spent on these programs every year, nearly half comes from the drug business, which not-so-subtly uses the education programs to push new drugs.

Last week, a conference at Georgetown University called “Prescription for Conflict” pulled together experts from academia, government, and industry to discuss the question: Should industry fund continuing medical education? The main instigator here is a former colleague of mine named Adriane Fugh-Berman, a doctor and teacher at Georgetown University Medical School. Fugh-Berman long ago became the nemesis of Big Pharma with a stream of articles and talks questioning the different aspects of liaison between the drugsters and the medical profession. I worked with her helping to set up PharmedOut.org, a website that seeks to educate the public on these liaisons, in part through exposes, both written and on video.

The conference at Georgetown included few critics as candid as Fugh-Berman. Those gathered included polite academics with hedged criticism of industry funding, and regulators like Joshua Sharfstein, principal deputy commissioner at the FDA, and Julie Taitsman, chief medical officer at the Department of Health and Human Services, who presented a list of the different laws protecting the public. By the time they finished, I was so frustrated with government bureaucrats that I was about ready to join the tea party (except that they, of course, would want to do even less to control the greedmeisters at Big Pharma).

One blunt critique came from Paul Thacker, an investigator for Republican Senator Charles Grassley of Iowa, who has been the most visible Congressional muckraker on the doctor-drug company love-in. Thacker bluntly told the docs to get off their supercilious “Who, me?” attitude and come to grips with the scarcely believable conflicts of interest existing between the medical profession and the drug industry—conflicts that more often than not have been to the detriment of their patients.

The industry, as always, insists it isn’t doing anything bad—far from it. Big Pharma, its representatives would have you believe, is really performing a public service, trying to educate docs so they can do a better job. This conference, however, offered a different point of view, in the statement of an anonymous “pharmaceutical executive,” who admitted industry involvement in “CME has the potential for inappropriate promotional messaging and influence.”

The anonymous exec went on to state: “Typically, companies make CME investment decisions at annual budget meetings. The sales and marketing divisions dominate deliberations and distribution of CME cash.” In deciding what institutions are to get money, he continued, “large volume, influential institutions are not likely to be rejected…Friendly institutions, as defined by access and volume, are more likely to receive grants than those that favor another company’s products. Grants may also be made in support of programs including particular KOLs [key opiniong leaders] whose opinions resonate with the promotional plan…Similarly, those known for positions antithetical to the company’s promotional plan are less likely to be supported.”

In conclusion, the exec said, “CME contributions are commercial decisions,” and, finally, “CME is not compatible with commercial intervention.” Too bad it takes a drug company whistleblower to make this statement of the obvious, rather than the medical organizations and government regulatory agencies who are supposed to be looking out for us.