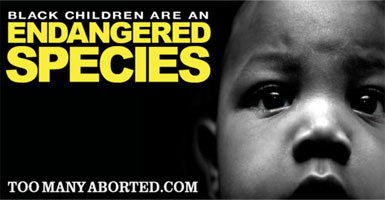 Emblazoned with slogans like “Black & Unwanted” and “Black Children Are An Endangered Species,” a second wave of anti-abortion billboards aimed at black women hit the Georgia cities of Macon, Savannah, and Augusta on Friday.

The 60-ad campaign, which first launched in February but was removed by pro-choicers, is part of a growing rumor (pushed by activist groups) that abortion clinics target black communities with the sinister aim of eradicating black people. Members of this race-based branch of the anti-abortion movement cite Margaret Sanger’s eugenics ties, the seemingly large number of Planned Parenthood clinics in minority communities, and the fact that black women have more abortions than other racial groups as evidence that racist intent underlies the pro-abortion movement. Ryan Bomberger, a representative from the Radiance Foundation, one of the billboards’ co-sponsors, told Mother Jones that “for the most part, most people make decisions about abortions based on false rhetoric. Part of that is that no one wants these [black] children.”

If unwanted children are really the problem, adoption and parenting are mentioned on Planned Parenthood’s site, but curiously not on the billboards. Plus, in 2008 there were 9% fewer black children awaiting adoption than white children. As for Planned Parenthood targeting black communities, according to spokesperson Diane Quest about six percent of the organization’s health centers are located in zip codes that have a black population of more than fifty percent. Quest told me that race does not factor in to Planned Parenthood locations, but a lack of affordable reproductive, family planning, and health services in an area does.

Unfortunately, the billboards’ co-sponsors seem to have little regard for pro-active solutions to abortion like preventing unwanted pregnancies. That black women tend to have more unintended pregnancies than other racial groups—which would help explain the abortion disparity—is dismissed as a liberal lie by the Radiance Foundation’s Bomberger. He also denied that women of color are disproportionately impacted by poverty (42 percent of women who had abortions were poor) which affects unintended pregnancies. Bomberger told me that “we don’t want one life to be destroyed to elevate the life of someone else” and “I believe abortion is inherently evil,” both of which pretty much sum up what’s at the heart of the race-baiting anti-abortion campaign. Basically, the Radiance Foundation and the billboards other co-sponsor—the mostly white Georgia’s Right to Life—don’t want women to have abortions, regardless of skin color. Both organizations pushed a now-dead Sex and Race Selection Bill to ban abortion providers from soliciting women of color in Georgia. Undoubtedly, the groups will endure but their billboards may not.  SisterSong, a Georgia reproductive health collective for women of color, successfully fought to remove the first batch of billboards in February and will no doubt work to get the new set taken down as well.