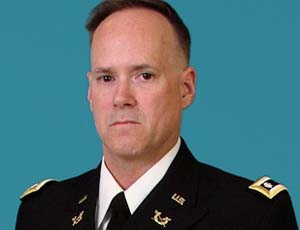 For an Army officer, criticizing the military commissions at Guantanamo as a perversion of justice probably isn’t the best career move. That goes double if you also happen to be a former top military prosecutor at Gitmo. That’s why Lt. Colonel Darrel Vandeveld, a US army reservist with nearly 20 years of service under his belt, fears the worst when a military promotion board renders its decision in his case this week.

Theoretically, the military brass reviewing his record could reward his distinguished service—to which various awards and commendations attest—and bump him up to full-bird colonel. Or, they could derail his military career. Vandeveld has reason to believe the board may attempt the latter—forcing into retirement the officer who, in a July 2009 congressional hearing [pdf], declared that “the military commission system is broken beyond repair.”

The road to that hearing room led through Bosnia, Iraq, Afghanistan, and, finally, the US detention center at Guantanamo Bay, where from May 2007 to September 2008 Vandeveld served as a military lawyer. In civilian life, Vandeveld was a senior prosecutor in the district attorney’s office in Erie County, Pennsylvania (he’s now the county’s chief public defender). He arrived at Gitmo a “true believer,” eager to do his part in the war on terror. At one point, according to Vandeveld, he was the lead prosecutor on one-third of the cases the Office of Military Commissions was preparing to take to trial—but all it took was one to throw his life and belief system into turmoil.

Vandeveld had been assigned to prosecute Mohammed Jawad, an Afghan detainee accused of lobbing a grenade through the window of a Jeep carrying two Special Forces soldiers and their interpreter near Kabul. When Jawad was taken into custody in December 2002, he was just a teenager—and he’d been in Gitmo for about five years before Vandeveld inherited the case. As Vandeveld recalled in congressional testimony last summer, “To me, the case appeared to be as simple as the street crimes I had prosecuted by the dozens in civilian life, and seemed likely to produce a quick, clean conviction, and an unmarred early victory for the prosecution, vindicating the concept of the Guantanamo Military Commissions.”

But Vandeveld soon learned that the case wasn’t straightforward at all. For one, he discovered that the evidence against Jawad and other clients was in utter disarray, “scattered throughout an incomprehensible labyrinth of databases” and “strewn throughout the prosecution offices in desk drawers, bookcases packed with vaguely labeled plastic containers, or even simply piled on the tops of desks vacated by prosecutors who had departed the Commissions for other assignments.” He also began to uncover information that gave him grave doubts not just about the Jawad case, but about the entire military commissions system. “Gathering the evidence against Mr. Jawad was like looking into Pandora’s box,” he testified. “I uncovered a confession obtained through torture, two suicide attempts by the accused, abusive interrogations, the withholding of exculpatory evidence from the defense, judicial incompetence, and ugly attempts to cover up the failures of an irretrievably broken system.”

Vandeveld ultimately became the seventh military prosecutor since 2004 to resign from the commissions over ethical qualms. In a strange turn of events, he was called to testify as a witness for the defense during a pre-trial hearing in Jawad’s case. Vandeveld, a devout Catholic, saw it as a confession of sorts. He went on to file a declaration in support of Jawad’s petition for habeas corpus, which was ultimately granted by a federal judge last summer. Jawad was subsequently released from Gitmo.

In July 2009, Vandeveld testified before a House judiciary subcommittee, providing a withering indictment of the commissions system. Not long after that, according to Vandeveld’s lawyer, Jeffrey Del Fuoco, Vandeveld received his first negative performance evaluation—just in time for the promotion review process that would decide the future of Vandeveld’s military career. “The performance evaluation was the only negative evaluation he’s ever received,” he says, adding, “We just think this is the Army’s way of rubbing his nose in the dirt.” In the military, such a blemish could be a career-ender, especially for more senior officers. “It pretty much is an end-of-the line-type document for you,” says Del Fuoco, himself a retired Army reserves colonel.

When he chose to resign, Vandeveld had ample reason to fear retribution. There was some precedent, he noted in a September 2008 declaration filed in the Jawad case. “Other officers who have displeased the powers that be have been subject to treatment that in my opinion was retaliatory in nature.” He raised the example of Air Force Col. Morris Davis, who for two years served as the chief prosecutor in the Office of Military Commissions. In October 2007, Davis resigned due to his belief that he “couldn’t ensure full, fair and open trials” under the existing system. Davis was subsequently denied a commendation—informed by a fellow officer that his service “has not been honorable.” Later still, his outspoken criticism of the military commissions got him fired as a division chief at the Congressional Research Service, where Davis worked after retiring from the military.

Lt. Colonel David Frakt, the Air Force reservist who served as one of Jawad’s lawyers, praises Vandeveld as an officer of the “highest ethics and integrity.” He believes Vandeveld’s superiors have worked to “sabotage” his chances of promotion and sully his name by, among other things, forcing him to undergo a mental health evaluation after he submitted his resignation. “This was a real campaign,” he says, “and some of it was visible, and some of it was behind closed doors within the Army.”

Vandeveld’s resignation and outspoken criticism of the military commissions, says Frakt, have done much to raise awareness about the inequities of the justice system at Gitmo—and about issues of detainee abuse and the use of coerced testimony. His story, Frakt says, is part of a broader narrative: “This is a battle for the hearts and minds of Americans over Guantanamo. It would be a shame if Colonel Vandeveld was a victim.”