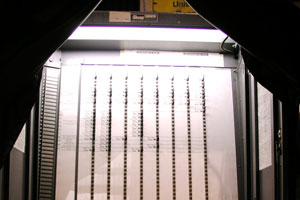 It’s been a crazy news week. Between the BP oil spill in the Gulf and the attempted terrorist attack in New York City, it’s been easy to forget about the crucial primary elections happening today in Ohio, Indiana, and North Carolina.

In Ohio, Secretary of State Jennifer Brunner and Lt. Governor Lee Fisher are pushing through the final hours of a bruising Senate primary. Fisher is ahead in the polls, boosted by a big ad blitz and the support of Gov. Ted Strickland, but Brunner is the favorite of party liberals. The winner will take on Rob Portman, George W. Bush’s budget director, who’s sitting on a $7.6 million war chest.

In Indiana, former Senator and longtime Washington lobbyist Dan Coats is the favorite to win the GOP nomination to run for the Senate seat being vacated by retiring Dem Evan Bayh. But Coats’ DC ties make him damaged goods, and some Republicans worry that a narrow win in the primary could damage their candidate.

Elsewhere in the Hoosier state, Rep. Dan Burton faces a titanic struggle in the Republican primary for the seat he’s held for nearly three decades. He won his 2008 primary by just seven points and faces four challengers this year. Most observers think Burton’s only hope is if the other candidates split the vote against him, allowing him to squeak through with mere plurality support. Rep. Mark Souder, another Republican, also faces a tough primary. And former Rep. Mike Sodrel, who beat incumbent Dem Baron Hill on his second try in 2004 before Hill took the seat back in 2006 (and won again in ’08), is trying to win the GOP nod for a very unusual fifth shot at Hill.

Meanwhile, in North Carolina, three Dems are battling for the right to run against incumbent Sen. Richard Burr. Secretary of State Elaine Marshall and state Sen. Cal Cunningham are the two candidates most likely to garner more than 40 percent of the vote. If one of them can pass that barrier, he or she won’t have to deal with a contentious—and expensive—runoff in June. Marshall is the favorite of liberals, but Cunningham has the most support from the DC establishment. Whoever wins will have a decent shot at Burr. North Carolinians don’t much like incumbent senators—no one has been re-elected to the seat currently held by Burr since Democrat Sam Ervin won his last race in 1968.

Can Marshall in North Carolina or Brunner in Ohio win one for liberals? Will Coats win easily in Indiana? The results tonight will help us get a better picture of what November’s most hard-fought races are going to look like.