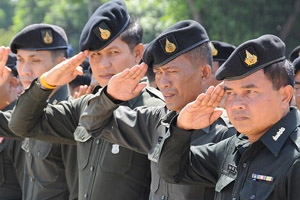 I’m hardly an unconditional supporter of the Thai government, but I admit I’ve been harboring some respect for the restraint its army has shown during the massive protests that have crippled Bangkok since March. After two dozen people were killed in clashes with troops that were trying to disperse the protesters, the army backed off, even though gunfire was coming from both sides. The protesters, members of the United Front of Democracy Against Dictatorship known as Red Shirts, have largely had the run of the town since, and say they aren’t going anywhere until Thailand’s prime minister dismantles parliament and calls new elections. I mean, would the US Army let thousands of protesters who were demanding the dissolution of Congress and sometimes shooting at soldiers shut down a square mile of Washington, DC, barricading themselves behind buses and flaming tires for two months?

But yesterday, Khattiya Sawatdiphol, a Thai general who had joined the protesters, was shot in the head by a sniper while talking to reporters. No one knows who did it. Thai newspapers are reporting the Red Shirts’ assertion that the government is responsible. They’re biased, obviously, but Thai authorities are indeed acting awfully suspicious. A government spokesman told the Bangkok Post that the government didn’t plan to kill Gen. Khattiya, but would have trouble determining who did. (Whoever it was will probably be successful: Khattiya is currently in critical condition; doctors say he’s unlikely to survive.) “It will be hard to arrest the ‘invisible hand,'” the spokesman said, “but authorities will try their best to find the shooter.” When does a government ever not say, “We’ve got all our resources behind solving this case and won’t rest until we have some answers” or whatever? When does an assassination attempt of a high-level figure, a military figure no less, happen in public, in the capital, on videotape, and the government response is, “Jeez, we’ll look into what happened, but that’s gonna be really hard”?

When asked directly by the AP if troops were involved in the shooting, another government spokesman gave this alarmingly shady answer: “The operation by authorities was according to international standards and law. So far, we have not found any actions by the authorities that went beyond that.” If the Thai government did not in fact try to kill this dissident, why wouldn’t its spokesman just answer that question by saying, “No”?