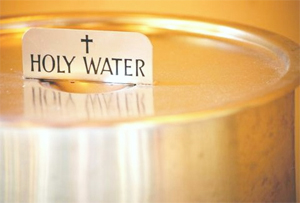 From butterfly ballots to fish stomping to (literally) insane drivers, South Florida is the weird news nexus of the universe. It’s also a place where big deals are conducted out of the sandy sunshine, in back rooms, by politicos and union reps. And that appears to be the case with Djuna Robinson and Leslie Rainer, two evangelical teachers in Broward County who stand accused of sprinkling “holy water” on an “atheist” colleague in the middle of her crowded classroom at Blanche Ely High School—my old high school.

Robinson and Rainer were removed from their jobs after their doused accuser, Schandra Tompkinsel Rodriguez, filed a school-board complaint against them. But they’ve launched a PR counter-offensive, alleging that the charges against them are “an attack on Christianity.” Their side is anchored by a controversial firebrand (and GOP-connected) minister in the school’s neighborhood, who demonizes gays and Muslims with gusto. Now, they’re getting some new allies from opposite ends of the spectrum: the county’s Tea Party and teacher’s union. The latter endorsement seemed to make sense…until I spoke today with the union’s spokesman, discovered one of the accused is a union steward, and started to wonder what’s going on in those South Florida shadows.

First, the teachers’s cause was taken up by Danita Kilcullen, the self-appointed leader of the Fort Lauderdale Tea Party (who has ties to the county’s Republican apparatus and several GOP candidates, like this one). When she’s not on streetcorners sporting a red ballcap that reads “RIGHT WING RADICAL” and hoisting a “FORCED TO PAY FOR OTHERS ABORTIONS” posterboard, Kilcullen apparently manicures the Tea Party’s website, which contains the usual Obama/ACORN/illegal alien/health care conspiracy theories (as well as a few official endorsements of GOP candidates, including one Kilcullen wanted to install as the county Republican chairwoman). This breakneck schedule of flitting about, peaceably assembling and freely speaking to the press about how unfree she is, didn’t stop Kilcullen from rushing to help Robinson and Rainer:

Aside from the religious leaders voicing support was Danita Kilcullen, the founder and organizer of the Tea Party in Fort Lauderdale. She vows to get the Tea Party behind the suspended teachers.

“Because it’s a breach of the First Amendment and because we so strongly believe in the Constitution in the United States of America,” Kilcullen said.

And what about the atheist teacher’s first amendments rights?

“Yea, but she hasn’t been punished for speaking out yet,” Kilcullen said.

More interesting is the defense Robinson and Rainer are getting from the Broward Teachers Union. The union’s spokesman, John Ristow, initially told the Broward/Palm Beach New Times that the two teachers would be “fully exonerated.” But when I called him up today, he demurred, saying that all three teachers were in the union, the union wasn’t taking sides, and he just wanted a fair outcome. “Based on our experience, it’s very unusual to transfer employees from a school for an issue that did not involve the threat or any real physical harm to another person,” he said.

Which seemed a reasonable response…except…couldn’t getting doused in one’s classroom against one’s will, with the added spark of religious tension, be seen as a physical incident?

Ristow, who declined to discuss any facts of the case, seemed to dismiss that concern. “I’m not going to make any judgment as to any harm done to a person if somebody is, uh, sprinkling some water on them,” he said. “Would you feel physically harmed?” Then he turned the tables. “An important question the reporters should be asking is, why were these two teachers punished and not the teacher who was allegedly talking about her atheism?” I asked him if he was confirming that Rodriguez was discussing her religious beliefs in class, and he again declined to discuss specifics.

After further questioning, though, Ristow acknowledged that one of the accused sprinklers—Robinson—is also the school’s union steward. That was a detail first publicized by an anonymous commenter on the Broward-Palm Beach New Times‘ website, and Ristow subsequently urged me to look into the rest of that “very interesting” comment. In essence, it alleged that Robinson, as the union steward, had been antagonizing the school’s administration, and Rodriguez was spying on her for the principal. That commenter wrote:

So before you read this article and decide to…decry Mrs. Robinson and Mrs. Rainer as “religious nut-jobs”, try looking at these facts and asking yourself if it is at least possible that Mrs. Robinson and Mrs. Rainer were set up by Mrs./Ms. Rodriguez and the Principal (Carlton Johnson) so that teachers would be less likely to file complaints against the Blanche Ely administrators.

From what I have heard from the teachers who know both the teachers and the principal involved in this case, I wouldn’t only say that a set-up is/was possible; I would say that it is more probable than you think.

That would be an incredible twist to an incredible story. But wait, I asked the union spokesman: If Robinson, the shop steward, was having difficulties with the school principal, you’d have a record of that, wouldn’t you? So is there some history of antagonism there?

Ristow declined to answer. “I’ve never been to that particular school,” he said. “But the amount of detail in that comment—it includes a rather lengthy description—is very interesting.”

So the union, the Tea Party, and a demagogue preacher have all taken up Robinson’s and Rainer’s case…with very different alibis. Which one—if any—comes close to the truth remains to be uncovered.