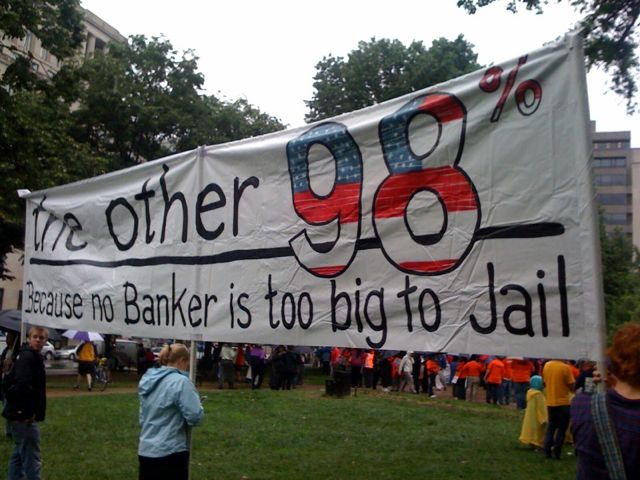 Members of "The Other 98%," a national organization demanding reforms benefiting middle and working class Americans, hold a sign at McPherson Square in downtown Washington, DC. Photo by Andy Kroll.

It didn’t take long for the handful of irritated Bank of America employees to abandon their desks and make for the doors. Their office, a small Bank of America branch on Massachusetts Avenue, had been more or less taken over by a boisterous rally of 75 or so protesters from the Service Employees International Union (SEIU), the organizer behind two days’ worth of Wall Street-themed protests in or near Washington. Yesterday, many of the same demonstrators, brought to DC from all over the country by SEIU and National People’s Action (NPA), a community organizing network, protested outside the houses of two financial lobbyists—one from Bank of America, another for JPMorgan Chase. The demonstrators railed against bailouts and demanded that the two lobbyists tell their respective CEOs to meet with SEIU and NPA’s leaders.

Today, the demonstrators bounced between various office buildings and banks in downtown DC, most of the locations linked to Wall Street, lobbying, or big banks. The day began in the building that houses the Corrections Corporation of America, a private prison company that’s received hundreds of millions of dollars of government contracts. After that came the Bank of America takeover, then a second, ad hoc protest inside a nearby Citibank office, to the dismay of the tellers and bankers inside.

Standing outside the Bank of America office in the morning rain was DC resident James Crowder. A Bank of America customer, Crowder cheered on the purple-clad protesters, baring a wide grin short a few teeth. “I totally agree with this here,” Crowder said. “They need to do this to all the banks.” 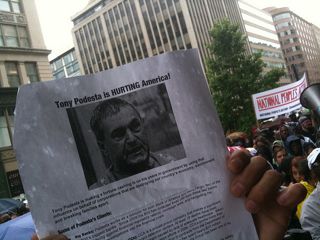 A protester holds up a flier criticizing Tony Podesta, the head of a top Washington lobbying firm. Flickr/movementvisionSoon after, with a police escort of four squad cars and two bikes, SEIU demonstrators convened with several busloads of NPA members outside the Podesta Group, a top Washington lobbying shop that represents, among others, Wells Fargo, Bank of America, and Sallie Mae, the country’s largest private student lender. There, as a light drizzle began to beat down harder, members of both organizations led chants and numerous speakers recounted their battles with big banks or mortgage companies.

With the rain now pouring down, the two-day stand by SEIU and NPA culminated around midday when upwards of a thousand protesters rallied in McPherson Square, then occupied the nearby intersection of 14th St and K Street. In the intersection, under a large cardboard cutout of a Lloyd Blankfein-esque Wall Street executive controlling a politician on a string like a marionette, SEIU president Mary Kay Henry and others spoke to the soaked crowd. “The American people have a deep desire to fix what’s broken with our economic and political system,” Henry said. “That’s why a movement is building across this country to challenge the toxic influence Wall Street and corporations have on our democracy.”

Finally, the throngs of people ended up in front of a regal-looking Bank of America office a stone’s throw from the White House and the Treasury Department. Even as members of the demonstrators peeled off to duck inside a coffee shop or head toward their buses, the chants—”We’re gonna take our democracy back / We’re gonna take-take our democracy back”—continued into the soggy afternoon.