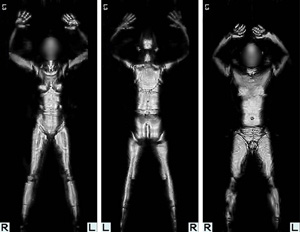 Ever hear the joke that someone’s pants were so tight you could tell what religion they were? TSA’s whole-body imaging may do the job for you. Today it was reported that a TSA screener beat his co-worker with a baton after the co-worker saw his body scan and repeatedly teased him for having a small penis. The whole-body scan of the employee was taken during a TSA training workshop at Miami International Airport on how to use full-body imaging.

The Smoking Gun obtained the police report, and according to those documents, the TSA screener said that after his colleagues saw the scan of his body, he was teased on a “daily basis” about his small penis and “could not take the jokes anymore and lost his mind.” He confronted one of his tormenters after work in an airport parking lot and “allegedly pulled out a police baton and began striking” the man. One witness said that the TSA employee told his coworker to “Get on your knees or I will kill you and you better apologize.” Another witness said they heard the employee say, “I’m going to blow your head off.”

If you’ve read my blog posts on the subject before, you’ll know I’m definitely not a fan of the TSA. I’ve asked to be full-body scanned to see for myself how invasive they are and been refused. That said, I feel for this guy. If I had a penis, I wouldn’t want my coworkers to know what it looked like unless it was exceptionally gorgeous and huge, in which case, carry on. But the fact that the TSA’s own employees are having a bad experience with scanners is telling. Although the scanners have repeatedly been criticized for their explicit outlines of breasts and genitalia, the TSA has repeatedly assured the public that they have a privacy algorithm to hide naughty bits. But if indeed the scan was so detailed it showed the size of a man’s package, it sounds invasive to me. And despite the TSA saying over and over again the scans cannot be saved, turns out they were lying. The scans can be saved, even though they’re only supposed to be when in “test mode.” In testimony to Congress last month, a TSA representative “did not dispute that test mode could be activated in airports, but said this ‘would’ not happen.” So in short, the scan of your—or your child’s—body can certainly be saved: it’s just against the rules. According to the TSA’s response to a FOIA filed by advocacy group EPIC, the TSA already has 2,000 scan images stored for “test purposes.”

More than that, these expensive scanners don’t show signs of going away anytime. They’re currently at 24 airports and are scheduled to be introduced into five more. As the New York Times reported, scanners were put into Boston in February and another was recently installed at Chicago O’Hare. And though for now the scans are voluntary, there may be repercussions for refusing. At Chicago, one woman declined to be scanned and instead got a extremely thorough manual pat-down. Another woman at Chicago refused a scan and was rewarded with a “level two” search of her luggage. Personally, I think most Americans will choose the quick, non-touch option of full-body scans rather than wait 20 minutes for a screener to pick apart one’s luggage, and I can’t say I blame them. I just wish there was another option.