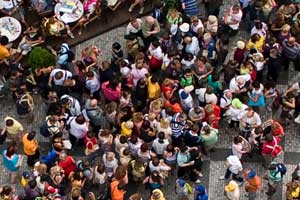 We put that question to several experts from diverse perspectives, including a feminist, a science writer, an obstetrician, a racial justice advocate, and the author of The Population Bomb.

They checked in on this Mother Jones forum May 12-14 to discuss their controversial answers with readers—and each other. Want to hear more from Paul Ehrlich, Fred Pearce, Julia Whitty, and the rest of our panel about their take on population control? Now’s your chance. Read below for their responses to reader questions.

Julia Whitty is an environmental correspondent for Mother Jones and author of “The Last Taboo“: Scientists from a variety of fields privately tell me the issue of overpopulation is simply too controversial—too inflamed with passions to get funded, too strong a magnet for ideologues. Those who’ve tackled it tell me of harassment, even physical threats, from a frightening fringe…Voiced or not, addressed or not, the problem of overpopulation has not gone away. [READ “The Last Taboo.“]

Paul R. Ehrlich wrote the controversial 1968 book The Population Bomb and co-founded the group Zero Population Growth: Overpopulation, combined with overconsumption, is the elephant in the room. We don’t talk about overpopulation because of real fears from the past—of racism, eugenics, colonialism, forced sterilization, forced family planning, plus the fears from some of contraception, abortion, and sex. We don’t really talk about overconsumption because of ignorance about the economics of overpopulation and the true ecological limits of Earth.

Courtney E. Martin is a senior correspondent at The American Prospect and editor of Feministing.com, the most widely read feminist publication in the world: Population control is a topic at the explosive intersection of so many of our most intractable public problems and precious personal decisions—global poverty, reproductive justice, consumption, racism, motherhood, even love. As such, it’s no wonder that it gets folks—public health advocates, globalization experts, and activists alike—all worked up. As we feminists have known all along, when the personal and the political mix, passions result. Add to this the fact that curbing population control involves—in one way or another—limitations and/or personal responsibility, and you’ve got a real doozy of a dilemma. Wherever you point the finger, there’s an inherent need to scale back—on babies, on stuff, on greed, on freedom. It’s just not something most people, especially most Americans, are open to. We have a bad habit of lamenting our global demise while refusing to take any personal responsibility.

Fred Pearce is a London-based science writer and author of The Coming Population Crash: You can’t get much more personal than telling couples how many babies they can have. Nor are there many greater intrusions on human rights. Yet back in the mid-20th century, many demographers considered the population problem so serious that, as I discovered when writing my book The Coming Population Crash, they thought people should need a license to have children. The conflict between human rights and ecological responsibility remains highly contentious. The controversy reached a peak in the 1970s, when the Chinese government introduced its one-child policy and the Indian government for a while imposed what amounted to enforced sterilization. The policies were so controversial they discredited population planners. Meanwhile, in the US, the debate about contraception became confused with debates about abortion. Today, population policies are discussed less in terms of top-down population control, and more in terms of increased rights for women to control their fertility. Paradoxically for some, this change has coincided with a dramatic fall in fertility across most of the world. Women are having half as many children as half a century ago; that has taken some of the heat out of the issue. It seems human rights and falling fertility can go together.

Martha Campbell is a political scientist with interests in economics, population, and scale: The sensitivity around the subject of population growth is widespread, and exists for a variety of reasons. Many people fear that if we talk about the population factor in development or the environment, we are implicitly condoning coercive family planning, or at least telling people to have fewer children. What isn’t widely understood is that the silence on this subject has been purposeful, and imposed by making the terms “population” and “family planning” politically incorrect for the past 17 years. The activist women’s groups who organized the silence in 1992-94 were seeking to move USAID family planning funds into other aspects of health, development, and economic strength that women genuinely need—without realizing that this move would severely reduce the budgets for family planning, so necessary for empowerment. The silence was achieved by focusing on the very real instances of coercive family planning, without ever mentioning the coercion of women being forced to have or keep pregnancies they did not want. Slowing population growth requires listening to women, giving them options—not telling them what to do.

Rinku Sen is a leading racial justice advocate, the publisher of ColorLines magazine, and president of the Applied Research Center: The reason people get so upset about population control is because historically reproduction has been controlled without the consent of the controlled person or community—usually with a deep racial or class dimension. Citing the urgency of saving countries, environments, or money, governments and others have conducted forced sterilization, adopted dehumanizing immigration policies, and generally let themselves off the hook for waste and overconsumption. Meanwhile, the tools people need to take control of their own family fate aren’t part of the conversation.

Malcolm Potts is an obstetrician and biologist, and creator of the Bixby Center for Population, Health, and Sustainability at UC Berkeley: Julia Whitty’s “The Last Taboo” is accurate, brilliantly written, and frightening. It is not quite so clear about the policies we need to pursue to avert a mega-disaster in northern India or much of sub-Saharan Africa. Microloans are an excellent idea. Education is an unfettered good but, fortunately, wealth and education are not prerequisites for smaller families. I say “fortunately” because if they were, then some countries would face insoluble problems. Pakistan, because of its rapid population growth, needs to accommodate 10,000 additional schoolchildren every day—it is not able to do that. Niger, which is projected to grow from 15 million today to over 50 million in 2050, is not able to dig itself out of abject poverty. Even illiterate women living on a dollar a day, as in Bangladesh, will use family planning when they are given correct information and easy access. Where family planning is realistically available, as in Thailand, illiterate women use contraception almost as well as college-educated women. As Julia Whitty points out, there are 200 million women in the world today who either want no more children or wish to delay the next pregnancy. The Obama administration, the Gates Foundation, the United Nations Population Fund, every ministry of health and every non-governmental organization concerned with women’s rights, child welfare, food security, civil conflict and the future of our tiny, fragile planet needs a single, unambiguous focus: Meet the existing unmet need for family planning immediately.

William N. Ryerson is president of the Population Media Center and Population Institute: When it comes to controversial issues, population is in a class by itself. Advocates and activists working to reduce global population growth and size are attacked by the left for supposedly ignoring human rights issues and favoring coercion as used by China, glossing over Western overconsumption, or even seeking to reduce the number of people of color. They are attacked by the right for supposedly favoring widespread abortion, promoting promiscuity via sex education, or working to harm economic growth. Many corporate-owned news media and many environmental groups avoid addressing the issue altogether, and our leaders don’t discuss it because politicians fear losing votes. One thing is certain: The issue of population is too important to avoid just because it is controversial. The planet and its resources are finite, and the Earth cannot support an infinite population of humans or any other species.