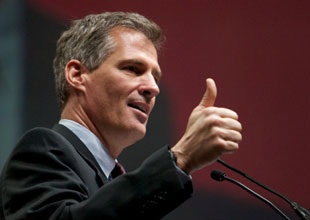 After Rand Paul crushed his opponent in Tuesday’s Republican Senate primary in Kentucky, he crowed that his victory was “a message from the Tea Party.” Pundits quickly branded Paul’s triumph—which followed Republican Sen. Bob Bennett’s primary defeat to a Tea Party-backed candidate in Utah—as evidence that right-wing conservative activists were tightening their hold on the GOP. But in midterm races throughout New England and the mid-Atlantic, the Tea Party movement could have a very different—and unintended—beneficiary: moderate Republicans.

It wasn’t that long ago that political observers were busily penning obituaries for Northeastern Republicans, who for many years formed much of the party’s moderate wing. During the George W. Bush years, the Republican Party became increasingly conservative and insistent on party discipline—and when Democrats made big gains in 2006 and 2008, moderate Republicans were the major casualties. In the Senate, Rhode Island’s stalwart centrist, Lincoln Chafee, lost his seat in 2006. The House’s last New England Republican, Rep. Chris Shays (R-Conn.), was voted out in 2008. “There is no place in the GOP now for the moderates,” one Boston University political historian declared. “The brand is dead in New England.”

But this year, anti-incumbency fervor—fueled on the right by the Tea Party movement—could bring the Northeastern moderates back from the dead. Republicans with centrist credentials are making strong bids for a number of recently vacated Democratic swing seats—and the Tea Party could aid their efforts.

Take former GOP Rep. Charlie Bass of New Hampshire, who’s hoping to recapture the congressional seat he lost in the Democratic takeover of 2006. A pro-choice Republican who’s advocated environmental protection and campaign finance reform, Bass has worked as an alternative energy consultant since leaving Congress. He’s reinvented himself in 2010 as a bombastic critic of a Democrat-controlled Washington, frequenting Tea Party rallies across his district. “God bless every single one of them,” Bass said of the Tea Partiers. “Their agenda is exactly the same as mine.”

This kind of talk has led to questions about his real allegiances. “Bass needs to let voters know who they will be getting if they vote for him: Is it the Charlie Bass of the Main Street Republicans or Tea Party Charlie?” writes New Hampshire’s Concord Monitor in a recent editorial. But Bass is running in a competitive primary against two conservative opponents (he currently has the highest favorability rating of the three). His Tea Party talk seems like a transparent attempt to appeal to the base. If he gets the GOP nomination, Bass could end up tacking towards the center in order to win the swing district, where he leads in the polls over his Democratic opponents.

Other New England Republicans have charted a similar course, courting Tea Party favor and playing down their centrist credentials—at least for now. The former GOP treasurer of Massachusetts, Joe Malone, is seeking the seat of retiring Democratic Rep. William Delahunt. Malone is an unapologetic supporter of abortion rights, gun control, and gay marriage, which he considers a states’ rights issue. However, he turned out for a Boston Tea Party rally on April 15—headlined by Sarah Palin—calling the event “the essence of democracy.” Malone is running in a competitive primary race against state Rep. Jeff Perry, who has similar views on abortion rights and gay marriage—and who’s also embraced the Tea Party. Massachusetts’ 10th district is now listed as a “toss-up” by political prognosticator Charlie Cook.

In the Connecticut Senate primary, former World Wrestling Entertainment CEO Linda McMahon and former Rep. Rob Simmons are tussling over who is the more authentic conservative—and have actively reached out to local Tea Party leaders. But both have moderate resumes. McMahon is a former Democratic Party donor. Simmons, while serving in the House, backed cap-and-trade climate legislation and a card-check measure that would make it easier for employees to unionize. Both support abortion rights (though McMahon opposes so-called “partial-birth” abortion), and Simmons favors gay marriage and stem-cell research. “There’s no way that evangelical, right-wing Republicans are going to win in New England,” says Gary Rose, a professor at Sacred Heart University in Connecticut. “Those that do win the election in 2010 will still be in line with the old Rockefeller-type of Republican, which is fiscally conservative, very socially moderate.” (The eventual Republican challenger’s prospects of winning the Senate seat have improved dramatically, since the New York Times reported this week that the leading Democratic candidate, Richard Blumenthal, made misleading statements about his military service.)

Even GOPers who’ve strayed farther from the party line have benefited from the anti-incumbency mood. Republican Rep. Mike Castle, who’s the favored candidate to win the Delaware Senate seat vacated by Vice President Joe Biden, is running on a platform of environmental protection and boosting clean energy. As a representative, Castle has repeatedly bucked the party line. He voted for the Waxman-Markey cap-and-trade bill and was one of two Republicans to recently co-sponsor a Democratic bill that would curb the impact of the Citizens United Supreme Court ruling that’s set to boost corporate spending in elections.

There’s a model for how New England moderate Republicans can win office while picking up support from the right-wing base: Scott Brown. Brown rode an anti-establishment wave to flip Ted Kennedy’s Massachusetts Senate seat in January. By costing the Democrats their Senate supermajority and nearly killing Obama’s health reform, he was heralded as a Tea Party hero. But his record was that of a Massachusetts centrist Republican—he’s pro-choice and supports his state’s gay-marriage laws, as well as its 2006 health care reform law. And in the months since he entered the Senate, Brown has started to let his moderate roots show. This year, he broke with his party to support a jobs bill and an extension of unemployment benefits backed by only four other Republican senators. On Thursday, Brown was one of only four Republicans who voted to pass the Democrats’ financial reform bill in the Senate.

Tea Party conservatives have felt increasingly betrayed by their former icon. “[I]f he keeps voting the way he votes, we will have to deal with it later,” one North Virginia activist tells the Huffington Post. But Brown is just behaving like a prototypical New England Republican—fiscally conservative, socially liberal, with a self-styled streak of Yankee independence. “He’s holding true to fiscally responsible beliefs, but not afraid to engage in meaningful dialogue with everybody,” says Ryan Williams, communications director for the New Hampshire Republican Party.

The big Democratic victories in 2006 and 2008 forced the party to accommodate more conservative and Blue Dog members. Similarly, the addition of more Northeastern Republicans into the GOP fold would diversify a party that’s become increasingly beholden to the likes of Sen. Jim DeMint (R-S.C.) and Rep. Michele Bachmann (R-Minn.). “The [Republican] coalition, just to become a majority, will have to embrace a more moderate hue than it currently does,” says former GOP congressman Tom Davis. This election—partly because of the Tea Party—may be just the right moment for “somebody who isn’t entirely in that Republican box.”