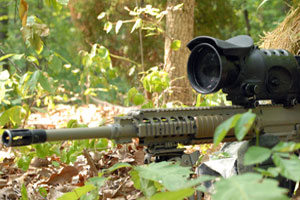 The US military’s default infantry rifle, the M-4, is not well-suited to the long-range battles that often unfold in the hills of Afghanistan, the Associated Press noted on Friday. The M-4 (an updated version of the Vietnam-era M-16) has an effective range of around 1,000 feet. But many fights with Afghan insurgents involve distances two to three times as long—2,000-2,500 feet. Trying to kill enemies who are half a mile away with a gun that can generally only kill people who are 1/5 of a mile away isn’t easy. So now the military is trying to give more troops in Afghanistan access to the M-110 semi-automatic sniper rifle, a weapon that fires a larger bullet and is accurate at 2,500 feet and sometimes beyond.

Despite the change, only nine soldiers in each infantry company—less than ten percent of the unit—are getting the new guns. That’s okay in some areas—the M-4 worked well in Iraq because most of the fighting was in flat areas at short distances or in cities at even shorter distances. There are places like that in Afghanistan, too, and when the terrain is flat or there is house-to-house fighting, the M-4 usually performs admirably. Even in the hills, there are many engagements where using the M-4 doesn’t prove problematic. Often, Afghan insurgents only have Soviet-made AK-47s, which they can rarely shoot effectively beyond 1,000 feet. Lt. Scott Doyle, a platoon commander in Zhari, told the AP that the Taliban are “spraying and praying” from beyond 1,000 feet with AK-47s.

The real problem with M-4s arises when American troops face insurgents who are armed with older, often World War 2-era bolt-action rifles. These Taliban “snipers” aren’t always particularly accurate, but their Lee-Enfields and Mosin-Nagants have much longer effective ranges than the Americans’ M-4s. (Soviet troops faced a similar problem with their AK-47s when they invaded and occupied Afghanistan in the 1980s). In this video from the New York Times, Americans in Afghanistan confront a distant Taliban sniper—and have trouble dealing with him. In a follow-up post, the Times’ CJ Chivers put the sniper incident in context:

From early last June through April 3 of this year, 478 American service members were struck by hostile gunfire in Afghanistan and 59 of them died of their wounds. This works out to a lethality rate of about 12.3 percent — a very low proportion by historical standards. (During much of the 20th century, roughly one in three American combatants struck by bullets in battle died.) In Afghanistan, the lethality rate of bullet wounds from 2001 through early last June was 15.6 percent. Since then, it has dropped. These lethality rates, both long-term and short, suggest that precision rifle fire from higher-powered rifles has not been a large-scale national phenomenon at any time during this war, and certainly not in the last several months.

So this isn’t a large-scale problem by historical standards. But it’s still a life-or-death issue. And troops will probably be grateful that the military is trying to make sure they have more options for dealing with different types of engagements. Folks who aren’t getting the M-110 are going to get ammo upgrades: the Marine Corps is starting to distribute an enhanced 5.56mm round (the size the M-4 and M16A4 use) that is similar to sniper ammo and can easily go through windshields and other barriers without changing direction.