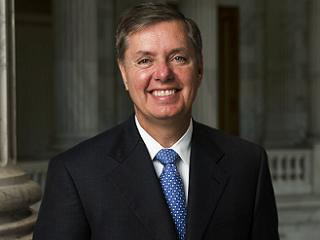 I spend a lot of time trying to figure out the riddle wrapped in a mystery inside an enigma that is Lindsey Graham and his work on climate and energy legislation. At this point though, I basically give up.

Graham gave a lengthy interview to ClimateWire yesterday, in which he noted that he has merely “paused” in his work on the measure, and could vote for “our bill” as long as it isn’t “substantially changed.”

This morning, his office blasted out a list of quotes from Graham which includes, among other things, his belief that the oil spill in the Gulf of Mexico means it “has become impossible” to pass that legislation this year, because there’s too much conflict over drilling. Apparently it didn’t occur to him that millions of gallons of oil polluting the Gulf might be an opportune moment to argue for ending America’s fossil fuel dependence.

“When it comes to getting 60 votes for legislation that includes additional oil and gas drilling with revenue sharing, the climb has gotten steeper because of the oil spill,” said Graham. He added, “I think it makes sense to find out what happened, enact safety measures to prevent similar accidents from occurring in the future, and then build consensus for the expanded offshore drilling our nation needs.”

When it comes to our nation’s policy on energy independence and pollution control, I don’t believe any American finds the status quo acceptable. Many senators from both parties have stated that Congress should set energy and carbon pollution policy, not the EPA. I could not agree more. Therefore, we should move forward in a reasoned, thoughtful manner and in a political climate which gives us the best chance at success. Regrettably, in my view, this has become impossible in the current environment.

I believe there could be more than 60 votes for this bipartisan concept in the future. But there are not nearly 60 votes today and I do not see them materializing until we deal with the uncertainty of the immigration debate and the consequences of the oil spill.

He’s absolutely right that the offshore drilling question is is driving a wedge between supporters of the overall effort. Senators generally counted as a solid “yes” vote are floating the possibility of a filibuster. But the idea that this means the Senate should abandon efforts on climate and energy legislation this year is, I think, just another example of Graham looking for an exit as the politics get tougher.

That said, I do think Graham honestly cares about the climate and energy challenge. Unlike others, I don’t believe he’s been negotiating “in bad faith.” But his latest search for an excuse to get out of the effort is probably a sign that Kerry and Lieberman need to move on without him.