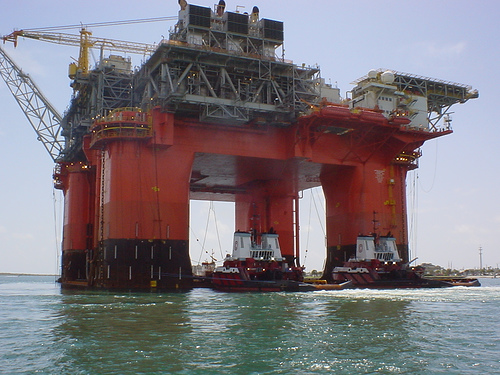 While the Obama administration called a time-out on new offshore oil and gas drilling a few weeks ago, they have so far allowed current drilling operations in the Gulf to continue. “We were not going to have those stopped mid-way,” Interior secretary Ken Salazar told senators yesterday. But now a group of legislators is calling on Salazar to freeze BP‘s other big Gulf of Mexico drilling operation, the Atlantis rig, until federal regulators certify that it is operating safely.

Reuters reports that at least 17 Democratic lawmakers urged Salazar to shut down the rig in a letter sent Wednesday. Lawmakers first raised questions about the safety of the Atlantis in a letter to the Minerals Management Service back in February, noting that they had heard “disturbing reports” of safety lapses and warning of the “risk of a catastrophic accident.” They cited whistleblower reports that the rig lacked “crucial engineering documents.”

In this latest letter, the members write, “We urge MMS to listen to the expert engineer who reviewed the Atlantis situation and called for an immediate shutdown until it can be shown that this platform is operating safely.” Rep. Raul Grijalva (D-Ariz.) is the lead author on the missive.

The Atlantis operates even farther below the surface than the Deepwater Horizon, at a depth of 7,000 feet, and produces 200,000 barrels of oil per day. “We are very concerned that the tragedy at Deepwater Horizon could foreshadow an accident at BP Atlantis, which is operating in deeper water than Horizon,” the House members write.

The group Food & Water Watch also filed a lawsuit this week seeking to force Salazar and MMS to shut down the Atlantis. “The Horizon oil spill was not a freak accident,” says the group. “Strong evidence reveals that the Atlantis platform is a disaster waiting to happen, and other platforms may be operating unsafely too.”

In Senate testimony on Tuesday, Salazar admitted that there have been lapses in oversight at MMS. He also said that there is “currently an investigation underway with respect to the Atlantis,” though he did not elaborate.