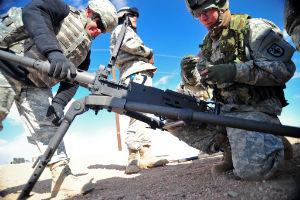 Thousands of frontline troops in Iraq and Afghanistan have been relying on World War I-era machine guns to survive combat—and as the weapons wear out, US contractors have been shipping the soldiers defective replacement parts, a Pentagon investigation has found.

The cash loss doesn’t amount to much—at most, $11 million—but the faulty parts left those thousands of soldiers in peril, the Department of Defense inspector general’s office (DODIG) said in a report released in January. The Pentagon’s logistics agency, which was responsible for the gun-parts contracts, “is not providing effective customer support to the warfighter and is missing opportunities to identify contractors with performance problems and to obtain adequate compensation for deficient parts,” the report concluded.

That investigation—which is accessible on the DODIG’s website (PDF) but has received little mention in the press—is one of several examples of contractor waste and abuse likely to be raised today at a hearing of the Commission on Wartime Contracting in Washington, a source familiar with the commission’s agenda told Mother Jones.

The machine gun in question has been an American fixture for nearly a century: The M2 .50-caliber Browning, an 84-pound behemoth called “Ma Deuce” by generations of soldiers, entered military mass production in the 1930s, but versions of it have been around in some version since it was first designed by gunsmith John Browning in 1918. Nowadays, the heavy-duty weapon is most often mounted on military autos, from Humvees to the more heavily armored Bradley and Stryker fighting vehicles. As of March 2009, there were about 32,000 M2 machine guns in the military, according to the IG report. Roughly 10,000 of those are in the field in Afghanistan or Iraq.

The M2’s longevity proves it’s a tough, effective weapon, but its hundreds of moving parts wear down under heavy use. “The timing on this gun is just like the timing on a car, where you have a timing belt and a piston,” Major Mike Pottratz, an Army weapons systems specialist, recently told Army Times. “If your timing belt breaks or is off…the gun will cease to function.”

After receiving a bevy of complaints from field soldiers about the scarcity and poor quality of replacement parts—backorders took eight months, on average, to reach the war zone—DOD inspectors took a look at the materiel contractors were providing Army units. They tested 21 different spare parts as well as a 98-part kit, all of which were deemed “critical application items”—parts that are “essential to the preservation of life in emergencies…the failure of which would adversely affect the accomplishment of a military operation.”

The conclusion: “Contractors provided at least 7,100 nonconforming M2 gun parts on 24 contracts,” the report stated. “As a result, increased risk was put on the warfighter.”

In one case, soldiers complained that more than 1,000 trigger bars had been sent with a a bend that curved to the right instead of the left. The contractor, it turned out, had misread the gun’s blueprints. It promised to correct the error, but 11 months later, it had only replaced half the parts.

Inspectors also took the Army to task for its byzantine paperwork requirements for soldiers’ complaints about the parts shipments. Service members in Iraq and Afghanistan had to fill out special “product quality deficiency reports” to register their complaints. “US Army officials also expressed concerns that the number of PQDRs may not reflect the complete magnitude of the quality problem,” the report stated, “because many soldiers do not have the time to prepare PQDRs during wartime.”

Then there were those 98-part maintenance kits. DOD inspectors found that contractors “had provided the US Army with only 2 complete kits; the other 58 kits were missing parts.” 31 kits, nearly a third, were missing 13 or more parts; one was missing 35. Army officials told inspectors that when the kits turned up incomplete, “They had to resort to other means to obtain the required parts”—name, stripping other guns for parts.

Mother Jones’ source said the contracting commission—a bipartisan investigating panel set up by Congress—was likely to be tough on DOD managers testifying before it in discussing the report today. That’s because procurers at the Defense Logistics Agency (DLA), which oversees the gun-parts contracts, never withheld payments from any of the civilian suppliers. Taken together, those firms—whom the report didn’t identify—took in $9,925,045. That doesn’t include another $455,000 in late fees the contractors never paid, or $655,000 Army weapons depots spent to try to fix the parts problems themselves.