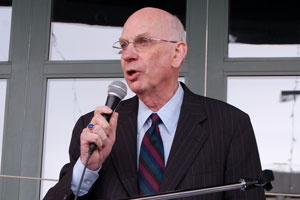 You can be forgiven for missing it—it’s not every weekend that big political news comes out of Utah—but the anti-incumbent fervor that’s sure to dominate the November elections has claimed its first victim. Bob Bennett, a three-term senator, came in third in the Utah Republican convention on Saturday, becoming the first sitting senator from the Beehive state to lose his party’s nomination in seventy years.

Bennett could still run a write-in campaign in the fall, but he won’t be the GOP nominee. Instead, Republicans will vote in a June 22 primary between businessman Tim Bridgewater, who finished first at the convention, and lawyer Mike Lee, who came in second. The winner of the primary will be heavily favored to take Bennett’s seat in Washington.

Bennett came under fire from the right because of his vote for the bank bailout and his role in writing a health care reform proposal with Oregon Dem Ron Wyden that would have required individuals to purchase insurance. Two conservative political action committees—the Tea Party-organizing Freedom Works, run by former majority leader Dick Armey, and the Club for Growth, founded by former Rep. (and Pennsylvania senate candidate) Pat Toomey—funded a barrage of ads against Bennett in the months leading up to the convention. But more broadly, conservative activists and the PACs believed that Bennett—the 27th most conservative senator—just wasn’t quite conservative enough to represent one of the most conservative states in the union.

David Frum, a conservative who has criticized the movement’s strategy, thinks the right waged an “unjust war” against Bennett, and argues that “the attack on Bennett sends the message that serious health care thinking is unwelcome in the GOP.” That may be a side effect of what happened. But the fact remains that Bennett was not as doctrinaire of a conservative as conservatives might have liked. From a political strategy standpoint, what FreedomWorks and the Club for Growth did to Bennett was perfectly rational.

Before the Civil Rights era, liberals and conservatives were split between both parties, and there was lots of bipartisanship. But since then, Congress has become an increasingly partisan place, with less room for voting across party lines. Liberals have gravitated towards the Democratic party, and conservatives have moved towards the GOP. Given that fact, it’s in both liberals and conservatives’ interests to make their parties more ideologically consistent. If one party’s members are more likely to defect on key issues than the other party’s members, the party with more defectors will be at a disadvantage, all other things being equal. (Philosophy professor cum blogger John Holbo illustrated a similar point earlier this year.)

Conservative activists are right to want the most conservative states to be represented by the most conservative members of Congress—just as liberal activists are right to prefer liberal candidates to moderates in deep-blue states. Even unsuccessful primary challenges can help activists’ cause by forcing rogue members to shore up their flanks. Politics is serious business. Trying to elect the most conservative (or liberal) member of congress a state or district can support is a totally rational—even obvious—move for activists. Moderates might have a different take, but the bottom line is that if you didn’t cry for Joe Lieberman, don’t even think about crying for Bob Bennett.