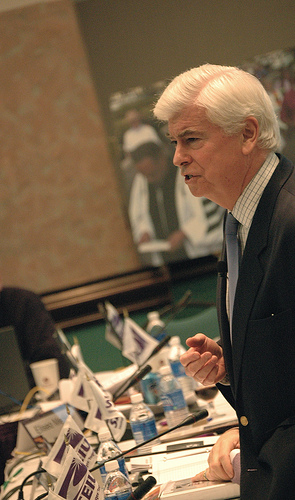 The two top lawmakers crafting the Senate’s version of financial reform—Chris Dodd (D-Conn.) and Richard Shelby (R-Ala.)—appear to have finally reached a breakthrough on arguably the most contentious issue in reform: ending the threat of too-big-to-fail banks and future taxpayer bailouts. In a compromise, the New York Times reports, Dodd and Shelby have decided to scrap a $50 billion fund that would’ve been used to liquidate failed megabanks. The money for that fund would’ve come from fees charged to the country’s biggest banks. Shelby and many Republicans opposed that fund, as did the Obama administration. Now, the Federal Deposit Insurance Corporation will handle the euthanization of big banks with support from the Treasury Department; the money spent to wind down those banks will later be recouped by selling the bank’s assets. Shareholders and creditors, meanwhile, will be forced to take losses in the FDIC’s wind-down process.

Dodd said on the Senate floor yesterday that the new FDIC proposal signaled that he and Shelby had “reached an agreement on the too-big-to-fail provisions.” Further preventing future taxpayer bailouts is an amendment offered by Sen. Barbara Boxer (D-Calif.) that outright bans taxpayers from being on the hook for rescuing big banks. Her amendment is expected to win both Democratic and Republican support.

Dodd and Shelby’s agreement, though, doesn’t mean the issue of too-big-to-fail and bailouts is done, as some disagreement remains. As Mother Jones reported yesterday, Sens. Ted Kaufman (D-Del.) and Sherrod Brown (D-Ohio) will introduce an amendment calling for strict caps on the banks’ size and amount of leverage—the amount of money they borrow to amplify the gains (or losses) of their bets. These kinds of capital and leverage limits are opposed by Republicans, haven’t gotten much of a hearing from Dodd, but are backed by outside experts like Simon Johnson, former cheif economist of the International Monetary Fund and a widely read commentator on reform, because they proactively limit the size of banks. The way the Senate’s bill looks now, there aren’t any provisions preventing the growth of too-big-to-fail banks, only a new council to keep a close eye on them and new ways to liquidate them if and when they fail.

Republicans had been blocking votes on financial reform amendments until Dodd and Shelby reached an agreement on too-big-to-fail. With that impasse now resolved, the Senate is expected to begin voting on amendments as early as today.