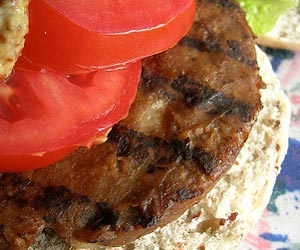 UPDATE: Veggie burger rumors are flying! Some readers and other news organizations have alleged that the study I wrote about on Monday was funded by the pro-meat, anti-soy group the Weston A. Price Foundation. But this morning, I spoke with Cornucopia Institute director Mark Kastel, who said that the Weston A. Price Foundation did not contribute any funding to the “Behind the Bean” (pdf) study. More here.

On Monday, I wrote about a recent study by the Cornucopia Institute that found that many popular veggie burgers are made with hexane, an EPA-registered air pollutant and a neurotoxin. Commenters had lots of interesting discussions and good questions, many of which require far more knowledge of the subject than I have to answer. So I called up Charlotte Vallaeys, the lead researcher on the Cornucopia Institute’s soy study “Behind the Bean,” (pdf) to talk about some of the issues readers have raised.

One commenter points out that “Soy protein, soy protein isolate, and textured vegetable protein all contain processed free glutamic acid (MSG).” Is there MSG in most fake meat?

Vallaeys says many fake meat products do in fact contain ingredients that are made from some of the same compounds as MSG (and processed free glutamic acid is one of them), though the Cornucopia Institute has not investigated the health effects of these compounds. Mayo Clinic’s page on MSG is here.

How about other soy products like tempeh and tofu? Are they often made with hexane, too?

Tempeh is rarely made with hexane, and most tofu isn’t either, unless it’s advertised as low fat or fat free. “If the product is made with whole soy beans, which most regular tofu is, that’s not hexane extracted,” says Vallaeys. “But some tofu companies are now coming out with a low-fat line of tofu, which is often done with hexane-extracted soy.”

“I switched to using mostly Quorn products because they are soy free. Are they bad, too?”

Vallaeys says she hasn’t looked into Quorn fake meat directly. I did a cursory search, though, and found that the main ingredient is a mycoprotein, a fungus. From this explanation of how mycoprotein is made, it doesn’t seem like hexane is involved, but man! Talk about a processed food.

“If any cooking oils, margarines, or other products that use oils don’t say ‘expeller pressed’ on the ingredient statement, they are likely processed with hexane.” True?

That’s right, says Vallaeys. “It’s not just soy-based oils either. Hexane is used to extract oils from corn and other plants, too.”

“Hexane’s boiling point is well below grilling temperature (69C, about 157F). That’s cooler than even a toaster. Is there any evidence that the slightest bit remains in a veggie burger?”

Vallaeys: “The evaporation argument is often used by the companies that make these products. But what happens to the food when you cook it with this neurotoxic compound? Does it react with other substances and create new compounds before it evaporates? That really has not been studied. We think there should be more testing done on what these substances do to the food.

Another commenter referred to a study where researchers fed hens hexane. Basically, they found that the hens could consume a whole lot of the stuff before experiencing adverse effects. So doesn’t this mean we shouldn’t worry about the miniscule amounts of hexane residue that may or may not be present in fake meat?

“That study is about hens, and as far as we know, there haven’t been any studies done on humans,” says Vallaeys. But she also notes that when it comes to human health effects of hexane, the residue issue isn’t the main point. “The bigger picture here is that hexane is being released into the atmosphere—since it’s an air pollutant. It leads to smog, which is ground-level ozone, which leads to a whole bunch of health problems, like asthma in kids. These effects are very real.”