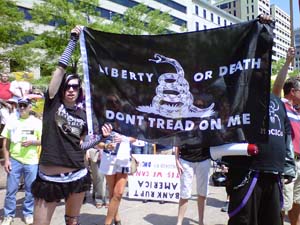 Riled by recent reports of Tea Party crashers who are trying to sabotage the movement, the anti-government activists who gathered in downtown DC for a tax day rally were keeping a suspicious eye out for possible impostors in their ranks. “There are people trying to infiltrate there,” said Dona Karas, a 54-year-old housewife from Pittsburgh, who attended a protest at Washington’s Freedom Plaza organized by the GOP-backed Tea Party Express. “There is a group trying to discredit this anyway they can.”

Karas was referring to recent news that pranksters were planning to participate in Tea Party’s tax day events in an effort to make the movement look intolerant and moronic. She saw this as proof that the racist, homophobic attacks on Democratic lawmakers during the health care vote weren’t the work of conservative activists but outside plants. “I have to believe it may have been somebody there trying to disrupt and discredit the good work that we’re really trying to do,” Karas said. To emphasize this point, she carried a sign that said, “I am not racist, crazy, homophobic or bigoted.” Other Tea Partiers wielded signs belying a similar concern about possible intruders: “Tea Party Imposters Go Home” and “Stop Obama’s brown shirt infiltrators and his domestic enemies of the constitution.”

Karas and other activists claimed that outsiders had been working to sabotage the very rally underway around them. “There was a man here antagonizing other people, looking at the signs, screaming—he was wearing medals, but I don’t think they were medals that he earned,” said a middle-aged woman at the rally, suggesting that the man was trying to provoke an incident. Karas added: “It was a black man, so I think he may take this as personal.”

Paranoia about infiltrators has led some activists to become wary of fellow protesters who don’t fit the profile of a typical Tea Partier. At the rally, I met two heavily pierced and tattooed young activists, dressed head-to-toe in Goth-style clothes and carrying a black version of the ubiquitous “Don’t Tread on Me” sign. “Due to the way that many in the Tea Party have been wrongfully stereotyped, they don’t think that I fit that mold,” said Mario Jones, 27, vice president of a Tea Party group in West Virginia’s Marion County. His 20-year-old companion agreed. “A lot of people are like, you don’t look like you belong here. This is my freedom—this is how I dress every day,” said Amanda Chatham, an unemployed mother from Philadelphia. She noted that she’d been spurred to protest by concerns about “getting [monitoring] chips put into our hands” as part of health care reform.

Tea Party supporters across the country warned activists to be on the watch for suspicious outsiders. In California, Tea Party-backed Senate candidate Chuck DeVore called for “vigilance” and “extra security to keep the peace” in advance of today’s rallies. “Groups such as Crashtheteaparty.org plan to disrupt the tea parties,” DeVore’s press statement said, cautioning Tea Partiers against “engag[ing] those who want to disrupt or attack.”

In DC, some protesters jokingly applauded the Tea Party’s anomalous Goth contingent. “Freedom comes in all flavors!” shouted one passerby. But others, heeding the warnings, were more skeptical. “They aren’t representative of the movement,” one woman informed me as I was trying to snap a photo of the pair. “No, I talked to them, they’re for real,” another man responded. “I’m not sure,” she replied, walking away as the rally dispersed.