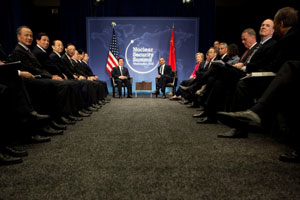 President Barack Obama’s nuclear security summit confronts the most important issue facing the world’s leaders: the possibility of a nuclear attack. Global challenges do not come more serious and immediate than this. And Obama has made history by being the first leader to convene such a gathering—47 nations are participating—to address the profound threat of nuclear terrorism. He has placed this harrowing matter at the top of the global to-do list. But despite the ambition of preventing a nuclear attack—by controlling nuclear materials and inhibiting the proliferation of nuclear weapons—the scope of the summit has been limited, purposefully.

The summit has produced important results. Ukraine announced it would get rid of all of its highly enriched uranium (HEU)—the material needed for a nuclear bomb—by the time of the next summit in 2012. The former Soviet republic also said it will convert its civilian nuclear research facilities to low-enriched uranium, which cannot be used for nuclear weapons. (In 1994, Ukraine, along with Kazakhstan and Belarus, agreed to remove all nuclear weapons from its territory and eventually eliminated about 5,000 nuclear munitions.) Right before the summit, Chile gave up its secret hoard of HEU and shipped it to the United States. On Tuesday afternoon, Secretary of State Hillary Rodham Clinton and Russian Foreign Minister Sergey Lavrov were scheduled to sign a protocol governing the implementation of an agreement for the United States and Russia to dispose of enough weapons-grade plutonium to make several thousand nuclear weapons. And Obama administration officials have been claiming that high-level talks accompanying the summit—particularly Obama’s meeting with Chinese President Hu Jintao—are bolstering support for imposing sanctions against Iran, which has been moving in the direction of developing nuclear weapons.

Yet there is something missing from the grand event: a sweeping vision of what must be done to avert the worst nightmare. At the opening plenary session on Tuesday morning, Obama laid out the danger:

Two decades after the end of the Cold War, we face a cruel irony of history—the risk of a nuclear confrontation between nations has gone down, but the risk of nuclear attack has gone up. Nuclear materials that could be sold or stolen and fashioned into a nuclear weapon exist in dozens of nations. Just the smallest amount of plutonium—about the size of an apple—could kill and injure hundreds of thousands of innocent people.

He noted that al Qaeda and other terrorist networks have tried to acquire material for a nuclear weapons, declaring “it is increasingly clear that the danger of nuclear terrorism is one of the greatest threats to global security—to our collective security.” (During recent briefings, White House officials have sidestepped the question of whether al Qaeda has made any progress on this front in recent years.) And the president said that the nuclear security initiative is “one part of a broader, comprehensive agenda that the United States is pursuing—including reducing our nuclear arsenal and stopping the spread of nuclear weapons—an agenda that will bring us closer to our ultimate goal of a world without nuclear weapons.”

But there is an important connection the president neglected to mention. Nuclear security is not the path to nuclear disarmament. Nuclear disarmament is the path to nuclear security. The nuclear weapons complex depends on highly-enriched uranium. As long as there are nuclear weapons, there will be HEU. As long as there is HEU, there will be the possibility of HEU theft and smuggling.

The most effective way—really, the only way—to block nuclear terrorism is to stop terrorists from obtaining HEU. Unfortunately, a nuclear bomb is relatively easy to make. Plans are available. A standard test for science grad students is to ask them to design a rudimentary nuclear bomb; they usually can do it. But a bomb needs a lump of HEU the size of a grapefruit, and HEU is hard to come by. While the technology of enriching uranium is not that complex, the manufacturing logistics are tough: thousands of centrifuges spinning away in a single facility. It’s a task that can only be done on a governmental level. A terrorist cell is not able to enrich its own uranium in a basement or in a mountain hide-away. Reduce the demand for HEU—that is, get rid of nuclear weapons—and there will be less HEU that could fall into the wrong hands. This demand reduction would also have to include an effort to end the use of HEU in civilian research reactors and medical isotope production. (Nearly 800 kilograms of HEU are used each year for these civilian functions, and that’s enough for 40 Hiroshima-style bombs.)

Writing in the Wall Street Journal on Tuesday, former Ambassador Richard Burt, who was President George H.W. Bush’s chief arms negotiator and a Reagan State Department official, pointed out that the “elimination of all nuclear weapons world-wide” is essential to nuclear security: “in an era when nuclear arms know-how and technology are increasingly available around the world, nuclear weapons don’t serve the interests of the United States, but those of rogue nations, failing states and terrorists.” That is, the balance of power has changed—to the disadvantage of nuclear states. In the post-Cold War years, the odds are low that the United States, Russia or any other nation will use nuclear weapons in a military conflict. Yet as long as they maintain an active international nuclear weapons complex, an opportunity exists for terrorists who would use these weapons. Put simply, the continued existence of nuclear weapons are of no practical use for the superpowers but keep hope alive for the evildoers.

Obama has done more than any other world leader to highlight the urgent need for enhancing nuclear security. But this is the big connect-the-dots reality: the world cannot be free of nuclear terrorism unless it is free of nuclear weapons. That fundamental truth is not clear and present at this historic summit.