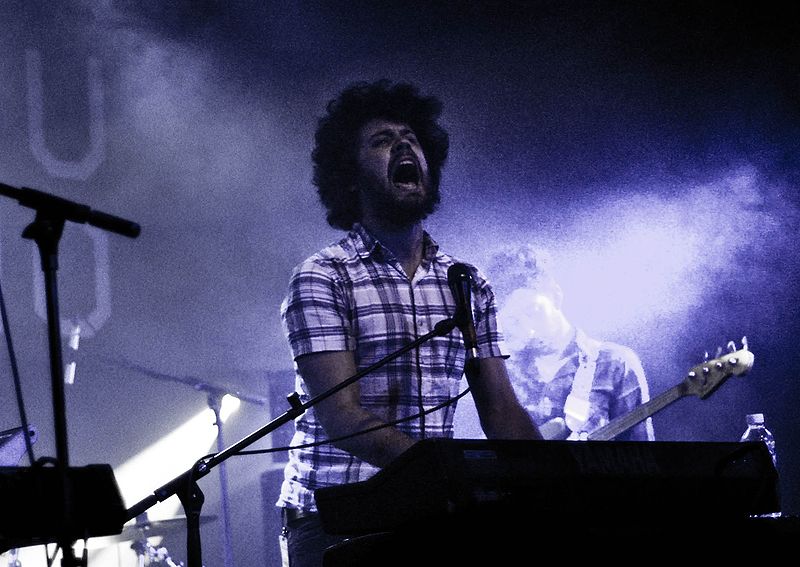 Passion Pit front man Michael Angelakos started his first band in kindergarten, a time when he focused his lyrical creativity on subjects like ninjas and dirt-bikes. Since those days, Angelakos has moved on to weightier subjects like love and self-deprecation, but the beats he and his Passion Pit bandmates create certainly don’t lack for youthful exuberance. In 2009, following the success of Chunk of Change—an EP Angelkos recorded solo in 2007 as a gift for his girlfriend—synth-tastic electropop band Passion Pit released its debut album Manners to critical acclaim and some criticism, too. Rolling Stone, however, praised the record, and Angelakos for “his loose beats, shamelessly fruity melodies and breathless little-boy vocals.” I spoke with Angelakos about the genesis of his relationship with music and what it means to go from being a one-man band to front man of a band that headlines tours and sells out shows.

Mother Jones: What first made you interested in music?

Michael Angelakos: Music is one of the few things I’m relatively good at, one of the things I understand a little better than everything else. I became really creative around the time I started understanding that people could be creative with music and that that was allowed. I stated taking piano lessons at age five, but I never did what my piano teacher told me to do. I would just do whatever I wanted. Pretty soon after that, my parents realized I wasn’t supposed to be in that bracket of children who follow the rules.

MJ: Were you in bands with friends in middle school and high school?

MA: Oh yeah, I had bands even in kindergarten. In fact, the beginning of “Better Things” is from a recording I made when I was five or six. It’s on a tape. And let me tell you, I was slave driving—my little brother had pencils in his hand slamming on a single-head snare drum and I was screaming at him to play in time for the recording. Really, I had tons of bands over the years. At one point in high school, I had 15 different projects. I just kept flying from one idea to another. This is why it’s hilarious to me that I’m still in this band after three years. The fact that I’m still doing it is like a weird therapy. If I didn’t have a label and a manager behind me, it would be tough for me to pay attention to just one project. I would have gone on and recorded five or six more CDs in the span of time I’ve been promoting this one record.

MJ: I gather you made Chunk of Change for your girlfriend; what was that relationship like?

MA: I’d had a relationship with her for a long time, and the record was a mixture of a love letter, an apology letter, a “things will get better some day/get well soon/sorry this isn’t going as planned” letter. Relationships have rough patches, and I guess we were there. I couldn’t say something like “Sorry, I did this wrong I did that wrong” because it wasn’t like that. It’s a pretty honest record, and the real reason she liked it was because we had both really fallen in love with dance music and dancing. It tailored to our tastes at the time, and she got her own little record made specifically for her. It wasn’t meant to be anything more than what it was. It sounds like a fabricated, annoying press story now, but that’s because people are cynical and don’t believe in things being true all the time. And I understand that. It was a Valentines Day gift, a belated one. Manners was finished late. Everything I do is late. I don’t think I’ll ever turn in anything on time.

MJ: Did it win her back over?

MA: It wasn’t like I had lost her, or that I was trying to get her back on my side. It was a very thoughtful way of expressing what we both were thinking at the time. We didn’t not like each other; we were sulking. We were at a point in our relationship where it wasn’t working, but at the same time you want it to work out because you like the other person so much. We’re still friends today, and things didn’t end on a bad note. That’s all that really matters. It was meant for her only, then other people got ahold of it, and here we are talking on the phone.

MJ: Going back to what you said earlier—that you don’t stick to the same thing for very long—are you feeling stifled by all this attention, or excited by it?

MA: I’ve grown up quite a bit. That’s an understatement. I’ve grown up a lot in the past year. And I’ve learned how to deal with the attention, both negative and positive, and use it to my advantage. I used to hate the attention. In fact, it was quite annoying. I hated the blog hype and how fast everything was happening. It didn’t feel natural to me. But at the same time, what’s more natural than thousands of people sharing your music because they just really like it?

For all the hyperbole and the annoying vernacular of bloggers aside, those people, they dictate what labels find now and dictate what’s successful. Look at Pitchfork, look at Audio Drums, look at all these tastemakers who have singlehandedly provided bands with careers. What I once kind of chastised, I now see as one of my greatest assets, that is, having those people on my side. Of course they turn on you at some point, but we really haven’t had that backlash. It’s really nice to know that you’re relevant enough for people to say “I prefer this band over Passion Pit or I prefer Passion Pit over this band.”

MJ: Which negative criticism has really rubbed you the wrong way?

MA: The one criticism that’s been really helpful to me has been of my voice. In a live setting, it’s impossible to pull this music off without an in-ear monitoring system. I couldn’t hear anything. I would listen back and think, what? What!? Why does it sound like that? I didn’t use Auto-Tune on the record. I didn’t make any amendments to my voice. The vocal sound was the one thing we got criticized for a lot in the beginning. Instead of 7 to 40 me’s on one recorded track, there was just one me with some delay and reverb during our live shows. We upgraded our systems, and now you look online and theres no one saying I’m singing off-key because we fixed the problem. So I’ve used all negative criticism to improve.

We’re a really young band and capable of quite a bit, but it’s very important to learn what to do when it feels like the critics are attacking you when really they’re not. Ah, I used to dwell on the bad reviews for so long. And then I said, you know what? I hate so much music! How on Earth could I think that everyone is going to like me? That’s impossible, in fact, and a lot of the music I hate, most people love. It’s just an immaturity thing. I just have to let it go.

MJ: Last question. How much more do you feel like Passion Pit needs to improve to be a finely tuned band—figuratively?

MA: When we are well-tuned, I’m going to be really bored with this project. I like problem-solving and seeing what happens with music that’s very difficult to translate live because it’s production-based. It’s been a challenge, but as soon as it stops being a challenge, it will stop being fun and interesting. This project has always been about perseverance. The fact that we still have our head above water when so many bands in this situation would have failed, it’s incredible.

I mean, I’m a perfectionist; there’s always something we need to improve upon, and I think that’s a really healthy model for artistic growth and progressing. I’m not ready for a masterpiece. I’m not ready for that kind of work. I’m ready for improving, improving, improving, and sustaining my writing muscle and artistic muscle. The minute you feel like you’ve completed something you lose that momentum, and when I lose that momentum, that’s what led me to the writer’s block I had for two or three years prior to Chunk of Change. And that was the most depressing, difficult time in my life. I’ve learned how to avoid that. That’s the bottom line.