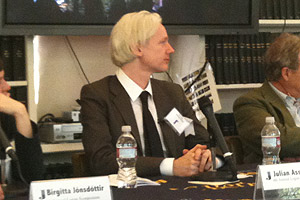 In addition to its video of an American helicopter gunning down two Reuters journalists in Iraq, WikiLeaks has made its name by taking on rich and powerful targets like Swiss banks and Scientology. And then there’s its not-so-rich or powerful targets, like us. Two weeks ago, Mother Jones got on the whistleblower website’s bad side by running David Kushner’s profile of its elusive founder, Julian Assange. Since then, Assange has accused us of “gutter journalism,” “craven sucking up to the Pentagon” and just yesterday, being an agent of “right-wing reality distortion.”

The latest salvo was fired when I caught up with Assange in Berkeley, where he was speaking on a panel at an investigative journalism conference at Cal. Beforehand, I approached the lanky, spectrally pale hacker-turned-journalist and apologized for suggesting that he’d sneakily given his comment on our site a statistically impossible 50,000+ “likes.” More importantly, I urged him to correct any factual errors he thought we’d made. And with that, Assange launched into an invective-packed browbeating that wrapped up with him snarling, “I don’t have the time to rip that piece of shit to shreds. Do your own fucking research.”

So, in the name of research, during Q&A time I asked Assange about WikiLeaks’ evolving identity. As recently as 2008, WikiLeaks said it would act as a “completely neutral” conduit for leaked materials and would crowdsource the analysis. But it’s taken its old wiki-style site offline indefinitely and published the Iraq video in an emphatic (if somewhat meager) package titled Collateral Murder. I asked Assange if WikiLeaks’ future scoops would follow this new, more top-down approach. The suggestion that WikiLeaks has ever changed its approach, Assange replied, was misinformation from the “right-wing reality distortion field.” I told the room that I worked for Mother Jones, which got a laugh. Assange shot back, “There’s been a lot of changes there in recent years.”

With-us-or-against-us attitude aside, Assange did have many admirable things to say. What journalist doesn’t get a thrill hearing about a media organization that’s not only designed to be “unsueable” but makes good use of progressive media laws in countries like Sweden to come after the people who come after it? Describing how WikiLeaks successfully repelled the “bastard” lawyers from the Swiss bank that tried to shut it down, Assange stated, “We crushed them like a bug.” Summing up WikiLeaks’ mission, he proclaimed, “The method is transparency; the goal is justice.” Put that on a bumper sticker.

And yet, for all his certainty and bravado, Assange could be slippery. When he was asked how WikiLeaks vets its leaks, he said the process had evolved over time, which seemed to contradict his response to my earlier attempt at right-wing distortion. He explained that the site only publishes materials of significant public interest that are being officially or legally withheld from the public. That covers much of its leaks, but what about Wesley Snipes’ tax returns or fraternity manuals? Or the case of Michaela Wrong, a journalist whose book about corruption in Kenya was posted on WikiLeaks without her permission? The ultimate rule on whether to withhold a leak, he said, “If there’s any doubt whether somethng is in or out [of WikiLeaks], it’s in.” Assange has crticized Kushner’s article for describing this very attitude.

Asked by the Washington Post‘s Dana Priest to describe government efforts to come after WikiLeaks, Assange mentioned the “ambush” of a colleague in a parking garage by British intelligence or a private security firm. He might have left it at that if moderator Lowell Bergman had not interjected, “Ambush?” Assange then explained that the episode involved his colleague being approached by a middle-aged man in a “good suit” who began asking questions about WikiLeaks. He also repeated his claim that State Department agents recently tailed him on a flight from Iceland, one of a couple of allegations of official skullduggery he’s walked back a bit since he first made them. “It could be coincidence,” he said, “But there’s a 1 in 400 chance of that.” He said he has State Department records to back up his hunch—so why hasn’t he released them?

Following the panel, Assange was, predictably and deservedly, mobbed. Besides, who wouldn’t want to meet that rare journalist who could crush you like a bug?