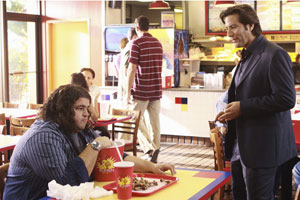 Last night proved that, indeed, everybody loves Hugo, aka Hurley, aka our favorite voice of normalcy and humor in the wacked-out world of Lost. But is he really leading his fellow Losties down the right path? And what exactly is he trying to do?

Hey, it wouldn’t be Lost without a lot of questions, and we got plenty of them in last night’s action-packed, romantic episode. Two explosions! Two attempted murders! Love in an insane asylum! To make sense of it all, we invited Steve from the Lost Recaps website to join us. Thanks, Steve. Read the chat below, and stay tuned for more surprise guests in the coming weeks.

Laurin Asdal, Director of Development: Hello all!
Steve, Lost Recaps blogger: Hi.
Nikki Gloudeman, New Media Fellow: Steve, thanks for joining us!
Nikki: So, let’s get the ball rolling. General thoughts on last night’s Hurley episode?
Laurin: Well there was a lot there.
Steve: Love that guy!
Laurin: I have to agree. I loved Hurley last night.
Nikki: Yes, me too. His presence is needed in the bizarre, intense Lost-verse. I was really touched by the Jack/Sun solidarity with him. Even though I think he’s leading them to something really bad.
Laurin: I don’t, I’m a believer.
Steve: Yeah. I’m with Hurley/Hugo/Hurley.
Nikki: But now MIB can get off the island and wreak his havoc.
Laurin: I don’t think he can leave. I think he thinks he has a shot at leaving.
Steve: I think Desmond is going to foil Smokey’s plans.
Nikki: I would love it if Des did. And I wonder how/if the foiling ties in to running over Sideways Locke?

Steve: I’m obsessed with what’s going on in Desmond’s mind grapes.
Laurin: Me too.
Steve: How much does flash-sideways Des know about the island?
Laurin: I think he’s the only one who has a real sense of a dual consciousness.
Steve: He certainly ran Locke’s ass down with vim and vigor.
Nikki: I think he knows everything.
Laurin: He knows that he has to get the 815 passengers to remember their OT selves.
Steve: Only on Lost does shooting teenage boys in the chest and running over a man in the wheelchair come across as sensible behavior.
Nikki: And now he’s also playing Cupid.
Steve: And tilting his sunglasses like Magnum P.I.!
Laurin: Sharpe dressed man!
Nikki: Super bad-ass. Loved it.
Steve: Did anyone else get a little freaked out to see Smokey Locke looking a little afraid of Desmond?
Nikki: Yes, because Des wasn’t afraid. That was a cool moment.
Steve: We haven’t seen him look afraid much, if ever.
Nikki: He knows Des knows.
Steve: Yes, he knows Des knows, but he doesn’t know WHAT Des knows, which is interesting. And neither does Widmore, it seems.

Nikki: Seems like love is what makes people remember the island. So maybe Des is trying to reconnect people. Who’s next?
Laurin: I think it’s love and near-death experiences that make you remember the island. Aka, why Desmond hit Locke with the car.
Nikki: But it’s weird—Locke is with his love in the sideways world, right? He’s the only one…
Laurin: But she wasn’t on the island.
Steve: I think that’s a sign that the pairings aren’t necessarily about love.
Nikki: Unless that’s (duh duh duh) sideways MIB!

Steve: I’m starting to think they’re about some sort of magnetic stuff.
Nikki: Oh that’s interesting. What kind of magnetic stuff?
Steve: We have Jacob touching people, most likely magnetizing them…I’m starting to think that’s how he finds everyone with his clever little Lighthouse. He done magnetized them. Then you got the magnetic-looking Smoke Monster business. I have no clear theory here, just the ramblings of a Lost-obsessed madman.
Nikki: That’s what this chat is all about! Mad theories.
Laurin: Magnetic energy, or energy itself, definitely plays a big role. I think that’s what is keeping Desmond immune to MIB. MIB has no power over him and he knows it.

Steve: Here’s another wacky half-baked idea. What if zapping Desmond is turning him into some sort of anti-Smoke Monster creature? He seemed to be deconstructing into particles last week.
Laurin: I think you are right.
Nikki: Like the force of good to Smokey’s evil?
Samantha Schaberg, Administrative Assistant: What if it’s making him Jacob? Is he a candidate?
Nikki: I dig that.
Steve: I always thought Jacob came across more as a father/creator to the MIB as opposed to a polar opposite.
Laurin: He could be, but I have thoughts that it might be Jack.
Nikki: Yes, I get that sense too. Though I also still think they might be brothers.
Laurin: That exchange with MIB and Jack last night was really telling. Maybe the true candidate is Jack.
Nikki: That would be cool, because it would probably pit science against faith once again.
Steve: Jack seemed to look at him a little like he would look at Christian.
Laurin: Jack was scared, I think, realizing this is not Locke, and Locke realized something in Jack.

Steve: So I have a few questions for y’all.
Laurin: Shoot.
Steve: Hurley has Jacob’s ashes! What’s he gonna do with them?
Samantha: Oh, is that what was in that bag?
Nikki: Is that what that was? I was so confused about what was in that bag!
Laurin: Toss them on MIB and he will MELT.
Steve: Who the heck is that kid that freaked Smokey Locke out?
Nikki: I think that kid might be young MIB. Like we saw young Jacob a while back.
Samantha: Yeah, I dig that.
Laurin: Could be. Could also be a young Jacob.
Nikki: Don’t know why their young spirits are running around.
Samantha: So does that mean it should be assumed they’ve both been there forever, since birth I guess? Or rather, mythical birth? Possibly the mama of humanity.

Nikki: Yeah, that makes sense, Sam. And soon, I hope, we’ll meet this crazy mother.
Samantha: Gaia. Mother Earth, the ultimate myth creature, the huge dark rift out of which everything came.
Steve: Which begs the question, when are we going to go back? WAY back? Back into time?! Back when people dug wells with their hands and what not.
Nikki: I’ve heard there’s an ep down the line that includes zero of the regular cast members. Could be the ultimate flashback, to the beginning of the island.
Laurin: Oh, wow.
Samantha: I would LOVE to see that.
Laurin: That episode is going to get me stoned.
Steve: I avoid spoilers but someone dropped that tidbit on me as well.

Samantha: I have a question…how does everyone feel about the increase in special effects in the show.
Nikki: Honestly, kinda meh.
Samantha: Yeah me too.
Nikki: Sometimes the FX is super lame.
Laurin: It’s a non issue for me.
Nikki: Like the underwater island. And the sub. But sometimes it adds to the show in a cool way.
Steve: I thought electromagnetizing Des was pretty cool.
Samantha: Oh yeah that was sweet.
Steve: I feel like they need to hold a bake sale to pay for FX sometimes.
Laurin: Yes.
Nikki: Ha, yeah, seriously.
Laurin: Clearly they have budgetary constraints.
Steve: People of Oahu! We have Rice Krispie Treats and Duncan Hines Brownies! Smoke Monster ep coming up, please buy stuff!!!
Nikki: I totally would!

Steve: Hey is anyone else psyched for this event Eloise Hawking-Widmore is throwing? Where everyone gets together? I think that’s the big shebang folks.
Nikki: Yes, there has to be a moment where they all come together.
Steve: I think that’s when Des is going to cross the two realities. That’s why she told Des he wasn’t ready to see the list yet, as opposed to just locking him up or something. It was more like, I don’t need you yet, Desmond, you’re not ready to do what you gotta do.
Nikki: So does she want him to do that?
Steve: What happens when all the constants get together?
Laurin: I think Locke getting run over will connect him with Jack who will then fix his spine.
Steve: I think about that sometimes when I should be looking both ways before I cross the street.
Nikki: Ah, The Constant! Another shout-out to my favorite ep.
Steve: Ooh good one Laurin. I didn’t even think of that.
Nikki: Yeah, score one for Laurin!
Laurin: (Bow). But I’m not clear how Jack is going to remember his island self.
Nikki: Maybe he’ll see Kate?

Nikki: Favorite moment of last night?
Laurin: When Hurley’s mom slapped him outside the gala event. Ha.
Steve: My fave was when Locke asked Des, “Why aren’t you afraid?”
Nikki: Jack and Sun following Hurley.
Steve: Because in that moment, he appeared to be afraid of Desmond. And that. Blew. My. Tiny. Mind.
Nikki: And Libby’s cracked out appearance at the restaurant, where she spoke cryptically. I love me some cryptic talk on Lost.
Laurin: Yes, as a serious scene I have to agree with Steve. I loved that too.
Steve: Yes cracked out Libby FTW! Girl, you so crazy.
Laurin: It’s like they are surrendering to fate. And that is the MIB’s worst nightmare.
Nikki: Ok, have meeting, gotta run.
Steve: Gotta run to a meeting too, loved chatting with y’all! Let’s do it again!
Nikki: Yes, thanks Steve!
Laurin: Thanks and bye!
Nikki: Namaste, fellow Lost nerds.