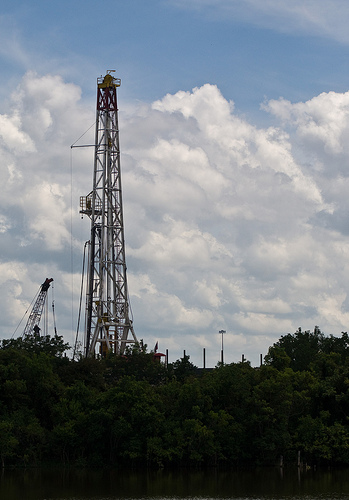 The natural gas industry would like us to believe that the chemicals they’re injecting into the ground in order to extract gas are as harmless as Coca-Cola. Therefore, they should be shielded from the scrutiny of federal regulators. No need to investigate—just take their word for it!

In comments to the Environmental Protection Agency obtained by Mother Jones, Penneco Oil Company, an oil and natural gas business based in Pennsylvania and West Virginia, says that it will “strongly oppose” increased regulation of hydraulic fracturing, a.k.a “fracking,” and questions why the EPA would even want to investigate the controversial practice of injecting water and chemicals into shale, coal beds, and other geological formations to extract natural gas.

Here’s one clue: Natural gas extractors have been found to use compounds containing toxic chemicals like benzene, toluene, ethylbenzene, and xylene. A congressional investigation recently found that companies have injected hundreds of thousands of gallons of diesel-based chemicals into the ground. Yet the industry is currently exempt from Clean Water Act standards, and companies are not even required to disclose exactly what their fracking fluids contain. The industry claims such information is proprietary.

Natural gas interests are fighting hard against efforts to subject the industry to tougher scrutiny. Shortly after the EPA announced that it would take a closer look at fracking due to concerns about water contamination, the industry began demanding protection under a climate bill. Penneco goes so far as to argue that the EPA is just making things up:

We are concerned that bureaucratic machinations have caused the EPA to hypothesize a problem and that EPA is now seeking research to justify a solution to a nonexistent problem. We are adamant that this process should start from the context of reality; Hyrdrofracking is a modern industrial and technological success which has delivered clean reliable energy to millions of American homes, reducing our dependence on foreign sources of energy — and that the research should work forward from that premise.

Instead, Penneco wants the EPA to take a more “positive” approach to its investigation. The company “would like to see questions for research prefaced and asked from the positive regarding hydraulic fracturing.” For example, “What has been the benefit to America’s streams and waterways as a result of hydraulic fracturing allowing for fewer acres of disturbance while increasing the amount of recoverable reserves?”

But perhaps the most comical part of the submission comes when the company claims that injecting diesel fuel and other toxic chemicals into the ground is no more dangerous than soda pop:

The formula for Coca-Cola is a closely guarded secret—though the ingredients are disclosed. In its dilute form—as a beverage—Coca-Cola is a known acid. It is entirely likely that in transport, as a concentrate, Coke may qualify as a toxic chemical. Perhaps, on game day at a stadium, where the stadium may have thousands of gallons of Coke syrup waiting to be mixed with carbonated water, the stadium may have high levels of toxic chemicals on hand. However, as we all know, there is no practical risk and the substance is relatively harmless. We believe that the same reasonable standard of common sense needs to be employed with hydraulic fracturing chemical studies.

Thus, Penneco concludes, any study from the EPA should consider the “absolute benefit that our society and the environment have reaped as a result of the introduction of hydraulic fracturing technology.” Glad that’s settled!

If Congress places limits on carbon dioxide, the demand for natural gas is only expected to grow—along with pressure by the industry on lawmakers to let it operate without scrutiny.