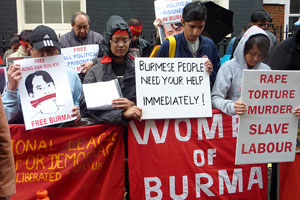 This week, Burma’s National League for Democracy, the party of detained Nobel laureate Aung San Suu Kyi, announced that it wouldn’t participate in the country’s first elections in two decades, which are to be held sometime later this year. Than Shwe, the general who heads the Burmese junta, insists that the contest will be “free and fair,” and despite mountains of evidence to the contrary, some outside observers appear to be buying the hype: ASEAN Secretary-General Surin Pitsuwan said that the elections are “a new beginning,” and the New York Times ran a bizarrely rosy story about the country’s future. But the NLD boycott reflects what everybody in Burma already knows—that the elections are a farce.

Let’s take a look at the aforementioned mountains of evidence:

1. The government is already cheating. The military’s proxy political party, the Union Solidarity and Development Association, has spent millions currying favor with the populace by paving roads, opening free health clinics, and giving away high school tuition. This started before the junta announced the rules for participating in the election (or even a date; October is the rumor), effectively crippling other parties’ ability to start campaigning. When the government finally did reveal the campaign rules, they were so stacked against the opposition—for example, barring Aung San Suu Kyi from participating—that the NLD sued to have them revised. The case was rejected.

2. Even if the generals don’t win, they could still “win.” In 2008, 92 percent of Burmese voters allegedly said yea to a constitution drafted by the junta. Never mind that the new constitution basically legalized forced labor or that the vote was held in the chaos following a cyclone that killed 140,000 people. Also, the last time the government held multiparty elections, in 1990, and lost to the NLD by a landslide, it simply declared the results void and kept Aung San Suu Kyi incarcerated.

3. Even if the generals admit that they don’t win, they still can’t actually lose. According to the constitution, 25 percent of the seats in parliament are reserved for the military, and the current government picks the candidates for president. And in the event that parliamentarians do start exercising too much power, the military machine could always just reassert control of the state, as it did in the coups of 1962 and 1988. Than Shwe reminded the populace of this possibility last weekend when he made the wholly unveiled threat that the army can step into politics “whenever the need arises.”

4. Bad guys will continue to hold the purse strings. The Times has cited the government’s decision to sell “a raft of state-run factories and assets to cronies in the private sector” as a sign of progress. But the reason the military is hastily selling off hundreds of state-owned properties—buildings, land, oil and hydro projects, ports, an airline—to its leaders and crooked friends is to guarantee that the country’s economy will remain in their grasp no matter what the election outcome.

5. There’s the matter of rampant discrimination and war crimes. Don’t discount, as most Western media does, the millions of ethnic minorities inside Burma’s borders, many of whom will not participate in the elections (the rules of which were published only in Burmese and English) and some of which have armed insurgent groups threatening to come out of retirement in the face of election-related turmoil. Also rarely discussed is the full-on, horribly bloody war in the east of the country. These minorities’ continuing disenfranchisement and targeting for annihilation is hardly a move toward peace and democracy. A UN official and more than 50 US congresspeople have called for an investigation into the regime’s crimes against humanity, but a clause in the wildly popular constitution stipulates that the perpetrators cannot be brought to justice.

ASEAN’s Pitsuwan may have cause for saying that the Burmese government’s decision to hold elections is a “step forward”—after all, that’s not saying much about a government known for its total disregard for political and human rights. But such falsely hopeful messages diminish the gaping distance between Burma’s current state and true democracy. Did the National League for Democracy have any choice but to sacrifice their chance to play along with the charade?