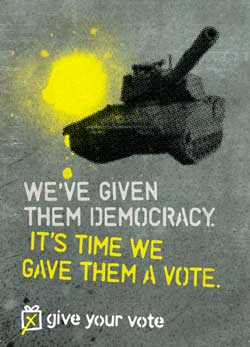 British Prime Minister Gordon Brown has just announced the date of the UK’s first national elections since 2005. And one nonprofit has launched a campaign to round up some unusual—and controversial—members of the electorate.

The organizers of Give Your Vote are on their way to collecting thousands of UK votes to hand out to citizens of Afghanistan, Ghana, and Bangladesh. Here’s how it works: People in the UK sign up to give their vote to someone in a country impacted by British policy. Bangladesh is a recipient because of the havoc wreaked on it by climate change; Ghana for how f’ed it’s gotten by trade policies; and Afghanistan for reasons I hardly need to point out. Give Your Vote will disseminate candidate information in local languages (the press materials quote a Bangladeshi who lost a home to rising sea levels as saying, “I will be looking for the party that has the best plans for dealing with climate change refugees”); those locals will text in their vote, which signed-up Brits will receive and cast accordingly on their behalf at the polls. The idea was cooked up by someone who was in Syria with a bunch of Iraqi refugees glued to the 2008 American presidential-election coverage to see what their own futures might hold. And it’s all legal. Spokesperson May Abdalla reminded me that “you get told who to vote for all the time”—via advertising, or political groups, or advocacy organizations; this is just “shifting where you’re getting your information from.” (And for the fact-checkers: The process’ legality was confirmed, by mutiple sources, with the UK’s Electoral Commission.)

Backers of Give Your Vote include Nobel laureate Desmond Tutu and celebrities like Keith Allen, who is apparently famous to British people. People who are really mad about it include the extremist British National Party, which has railed against the initiative on its blog, the readers of which, if the comments section is any indication, all hate Muslims.

While the BNP is claiming a Marxist plot to undermine British sovereignty and “punish the prosperity of Britain,” Abdalla swears that the idea is just to get people thinking about how to make democracies more accountable for their wide-reaching actions. An American group is planning to strike up a similar program for the 2012 US elections, and I’m looking forward to the debate between those liberals/socialists and the Tea Partiers. Either way, you can’t argue, at least, with one of Give Your Vote’s slogans: “Many of the issues that the UK decides on are global. The electorate is not.”

I think that’s a pretty good point. But since I work with a bunch of commies, you know, I would.