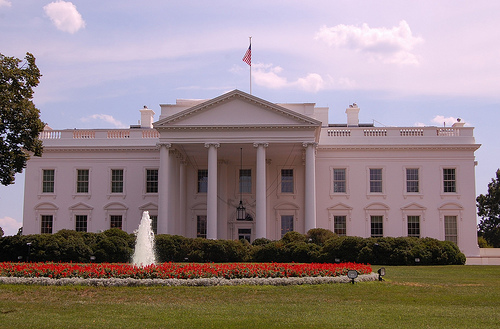 For months now, Sen. John Kerry (D-Mass.) has been promising that the climate and energy bill he’s authoring with Joe Lieberman (I-Conn.) and Lindsey Graham (R-S.C.) will be released sometime soon. Last week, his spokesman told me their bill would be made public in the “coming weeks.” But it’s well known that the trio is not introducing anything until they have 60 senators lined up behind them–and from what I hear from Senate staffers, it’s not clear that they are anywhere near that number yet.

But that could change. Key senators and a number of swing voters on the issue are huddling at the White House this afternoon for a closed-door session with administration officials. In addition to the authors, Democrats Max Baucus (Mont.), Jeff Bingaman (N.M.), Barbara Boxer (Calif.), Sherrod Brown (Ohio), Maria Cantwell (Wash.), and Jay Rockefeller (W.Va.) are on the guest list. On the Republican side, Susan Collins (Maine), Judd Gregg (N.H.), George LeMieux (Fla.), Richard Lugar (Ind.) and Lisa Murkowski (Alaska) have been invited.

The invite list is a pretty good guide to the senators who are seen as crucial votes if anything is to be passed this year. Cantwell and Collins have their own competing climate legislation, and there’s been a lot of chatter about whether they would sign onto the Kerry-Graham-Lieberman bill if it incorporates enough of their ideas. Rockefeller last week introduced a bill to delay Environmental Protection Agency regulation of carbon dioxide for one year to protect coal states and give the Senate more time to act. Murkowski has been leading efforts to block EPA rules forever, because she says regulating greenhouse gases should be the job of Congress. And Brown has been the key Democrat negotiating for measures to protect trade-exposed, energy intensive industries in a climate plan. The list reflects not only key senators but key constituencies that need to be won over.

From the administration, Energy Secretary Steven Chu, EPA administrator Lisa Jackson, Interior Secretary Ken Salazar, and Secretary of Agriculture Tom Vilsack are expected to attend. While White House climate and energy adviser Carol Browner has said that the administration does not plan to offer a legislative outline to the Senate, the participation of cabinet members in today’s meeting indicates high-level engagement in the negotiations.

Environmental advocates are taking this meeting as a signal that there may actually be forward movement on legislation soon, despite the countless obituaries that have been written for climate policy.