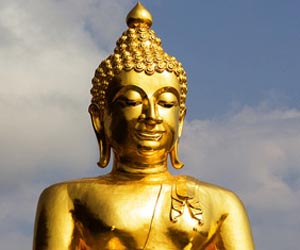 “I’ve heard that Thailand is one of the most beautiful countries in the world,” someone said at a reading I did recently. “Would you recommend going there?” Well, it is indeed gorgeous, and ’tis the season: Each spring, millions of tourists, hundreds of thousands of them Americans, rush Thailand like so many Leonardo DiCaprios. Last year, the country’s massive tourism sector took a hit when people were scared off by political instability and swine flu. And though Thailand’s Tourism Authority expects growth of up to 10 percent—some 15 million visitors—in 2010, perhaps it’s time vacationers again ignore the package deals and student discounts to protest the Royal Thai Government’s insistence on trying to get innocent civilians and babies killed.

Though you’ve undoubtedly heard criticism of the country’s failure to curb sex trafficking and child prostitution, you may not know that Thailand is actively terrorizing some of the world’s most vulnerable people: refugees. Unfortunately for Thailand, it’s neighbor to plenty of conflict-ridden countries, like Vietnam, Laos, and Burma. Unfortunately for the people fleeing those countries, Thailand is not a signatory to the 1951 UN Convention Relating to the Status of Refugees, so it doesn’t have to recognize and protect refugees if it doesn’t wanna. And, well, it doesn’t wanna. Granted, I have a huge hard-on for refugee causes, particularly re Southeast Asia, but anyone would find the country’s behavior in the last few months appalling.

1.    In late December, the Thai army started trucking thousands of ethnic Hmong refugees back to Laos, many of them against their will, despite concerns that they’d be persecuted when they got there. The reason that’s a possibility, let’s not forget, would be that the Hmong fought and died on the side of the United States in the Laos edition of the War on Communism, which we lost. But since refugees in Thailand aren’t recognized as “refugees,” they are treated as illegal immigrants: The United Nations can be prevented from offering them assistance, and they can at any time be deported back to whatever horror they fled. This was not the first time Thailand took such action against the Hmong.

2.    Such lack of protections has led to exploitation by Thai police, who are, as one DEA agent working in Bangkok put it, “so corrupt it turns my stomach,” and who supplement their incomes by bribing indigent migrants and war victims. Earlier this year a Thai cop murdered nine ethnic Karen from Burma who couldn’t pay up.

3.    In February, Thai soldiers started repatriating thousands of Karen refugees against their will (also not the first time Thailand took this action against the Karen), despite fears of land-mine injury, among other even worse atrocities (careful: upsettingly graphic link), and despite the fact that other governments, like ours, pay for their care. This minority, too, fought their government on the side of the US of A, during WWII, service for which the Allies promised them independence from their oppressive homeland but never delivered.

I’m not the kind of gal who cries “boycott” easily, and I’ve spent more time in Thailand than any other place abroad. And it’s not like we never mistreat those in desperate need of sanctuary here at home. But potential visitors to Thailand should consider its gross human rights violations, and that the US Committee for Refugees and Immigrants named it one of the seven worst places in the world to be a refugee (PDF), and that even though the Thai government’s abusing refugees rarely makes it into mainstream news, usually because Angelina Jolie gets involved, that treatment is the rule, not the exception. Travel and tourism contributes nearly 7 percent to the country’s GDP and accounts for more than 10 percent of its jobs. A widespread boycott might finally put the real pressure on the country that tourists’ governments, sadly, won’t.