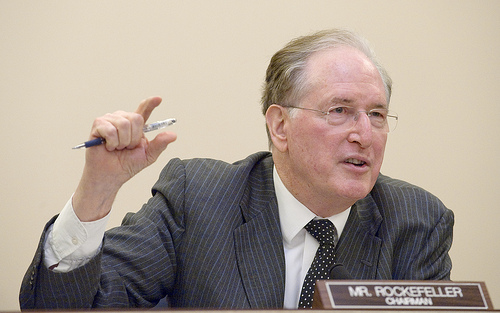 West Virginia Sen. Jay Rockefeller on Thursday became the latest Democrat to launch an effort to block the Environmental Protection Agency from regulating planet-warming emissions, with the introduction of a bill that would put the brakes on regulatory action for two years.

His reason? To “protect clean coal state economies.” Of course, “clean coal” doesn’t actually exist yet. The entire press release on his bill is a study in wishful thinking. “Today, we took important action to safeguard jobs, the coal industry, and the entire economy as we move toward clean coal technology,” said Rockefeller. The release continues: “Senator Rockefeller has been working to protect West Virginia clean coal and secure the economies in clean coal states.” If you repeat the phrase enough times, will it actually become real?

Rockefeller’s bill is just another delay on rules that his colleague, Robert Byrd, has said the coal industry should accept as inevitable and necessary. The EPA is moving forward on regulations under the Clean Air Act because the Senate has so far not passed a new law. Rockefeller has not so far been supportive of congressional actions. He said he had “serious concerns” about the House-passed cap-and-trade bill that would, incidentally, direct a whopping $60 billion to carbon-capture-and-sequestration, aka “clean coal,” technologies.

Rockefeller’s measure would call a time-out on anticipated rules for emissions from power plants, refineries, factories, and other stationary sources. It would allow the agency to move forward, however, on rules for automobiles, which are expected by the end of the month. EPA administrator Lisa Jackson laid out a slower timeline for regulations last week to allay concerns from Democrats like Rockefeller. But while he said that was a positive sign, he remains “concerned it may not be enough time.”

Rockefeller’s fellow statesmen on the House side, Nick Rahall and Alan Mollohan, are expected to introduce identical legislation, along with Rick Boucher (D-Va.).

This is just the latest in a growing bipartisan attempt to block the EPA. Lisa Murkowski (R-Alaska) is leading efforts to nullify the agency’s finding that gases threaten human health, the precursor to legislation. She has support from Democrats Mary Landrieu (La.), Blanche Lincoln (Ark.) and Ben Nelson (Neb.). And on the House side, Collin Peterson (D-Minn.), Ike Skelton (D-Mo.) and Jo Anne Emerson (R-Mo.) have introduced identical legislation, as has the GOP caucus. Murkowski called Rockefeller’s legislation “further evidence of the growing, bipartisan, and bicameral resistance to EPA’s back-door climate regulations” in a statement. She said she would support his bill, while keeping her disapproval resolution on reserve in case his failes.

Environmental groups argue that Rockefeller might as well have joined Murkowski’s efforts. “In our view, there is little difference between no action for two years and no action ever on solving the climate crisis,” said Joe Mendelson, director of global warming policy at the National Wildlife Federation.