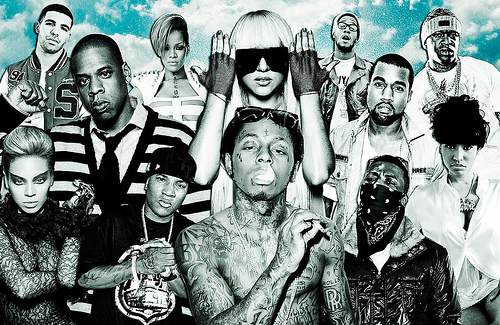 An ocean of ink has already spilled over ‘Telephone’, Lady Gaga and Beyoncé’s stunning nine minute video epic, and little wonder—since its debut on Thursday, “Telephone” has already been banned from MTV. A decade ago, that would have spelled disaster; today, it’s merely a stepping stone to cultural significance. To wit: The single that “Telephone” supposedly promotes has been been spinning on Top 40 radio since late last year.

If you haven’t seen it yet—which I find inconceivable—the video is after the jump. Summary: Lesbian outlaws Lady Gaga and Honey B (Beyoncé) are too busy fighting their way through prison, busting out, and poisoning diners full of innocent backup dancers to take your call at this time. Please try your call again later.

Despite the gratuitious product placement and explicit (not to mention explicitly homosexual) eroticism, the MTV ban should be the most significant takeaway for viewers. Just as Michael Jackson’s mini-monster movie “Thriller” marked the ascendence of television as the new medium for music, “Telephone” signals the final move of music, and with it music culture, from TV to the internet.

Not that you’d know it from the critics. Fittingly, “Telephone” first came to my attention (and, I’m sure, countless others’) as a Facebook/Twitter update about instant photos and cigarette sunglasses, though cigarettes are about the only unbranded element—insofar as face-obliterating aviators can ever be divorced from Kanye West. To date, the blogosphere’s ire has focused on the video’s vulgarity and promotional in-fixes, with a little adulation for its homophilic storyline. At last count, Gaga and Honey B were hawking Virgin Mobile, Diet Coke, HP, dating site plentyoffish.com, Polaroid, Coors Light, and Miracle Whip.

The video made equally overt references to, in no particular order: Michael Jackson’s dance moves; Madonna’s ’80s eyebrows; Quentin Tarantino’s entire oeuvre, not to mention his Kill Bill “Pussy Wagon”; Shania Twain’s “That Don’t Impress Me Much”; Betty Page; Thelma and Louise; and the 1974 lesbian pulp film Caged Heat. I’m leaving several out, but you get the idea. Even for nine minutes, that’s a lot to say. Importantly, these references are aesthetically indistinguishable from the campy product placements they bookend. That is, they’re equivalent. Like the MTV ban, that’s certainly by design. (I mean, why else would they have said “motherf—er” twice?)

It’s not a reach to call this commentary on the cultural moment—Gaga herself said as much in a recent interview. What some viewers might not recognize is that “Telephone” is neither more nor less than a Facebook update in dramatic form, its “@”s implicit and its URL pathways waiting to be paved.

Like it or not, B and G have tapped a vein in the zeitgeist, producing a piece of agitprop for a generation that increasingly conflates consumption with aesthetic and aesthetic with identity. Only in an era so thoroughly self-referential and saturated with information could a nine-minute remix of an already overplayed song generate so much energy. In its most basic form, “Telephone” is the Technicolor avatar of David Shield’s just-released “manifesto” Reality Hunger (glowingly reviewed and excerpted in this Sunday’s Times)—the undigested amalgamation of raw culture qua culture. Example: dj Girl Talk and 17-year-old German author Helene Hegemann. Example: Shepard Fairey and the Huffington Post. Example: Twitter. In an hour where every new idea is old in 30 seconds, it doesn’t matter what you referenced, only that you did.

Not that consumer choice as identity is new: to Reagan-era America, Levi 501s were an inalienable human right, and their absence in the Soviet Union proof enough that we were on the right side of history. But it’s also true that whatever rabid consumerism has stolen from us, it’s also given us an America where 15 million viewers tune in to watch an extended commentary on whatever this is—because let’s face it, we’ve all heard the song before. Leaving aside the Miracle Whip, isn’t a short film portraying two of the country’s most successful and talented young artists as a strong, interracial lesbian couple—however campy—something celebrate? I mean, this is the woman who sang at the inaugural ball! And even if it’s not, at least Gaga and Beyoncé made Coors and Coke pay to laugh at themselves. And that alone makes it worth linking.